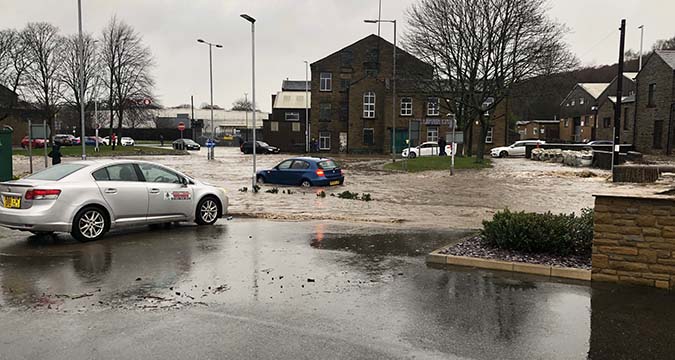 Storm Ciara took its toll on Sunday’s Rugby League programme across three competitions, and it will also affect this weekend’s opening round of matches in Betfred League 1.
Both Betfred Super League fixtures that were scheduled for West Yorkshire on Sunday afternoon – Huddersfield Giants v Leeds Rhinos, and Wakefield Trinity v Catalans Dragons – were postponed because of a combination of heavy rain and strong winds.
The Wakefield-Catalans game may be rearranged for Monday night, although Wakefield’s chief executive Michael Carter has stressed that would only be possible if the weather improves. There will be a pitch inspection on Monday at 9.00am, but it appears highly unlikely that the match will go ahead. It is likely to be re-scheduled for later in the season.
No date has yet been suggested for Huddersfield-Leeds, with the clubs entitled to wait until later in the season.
In the Betfred Championship, three of the five matches scheduled for Sunday afternoon – at Featherstone, Swinton and York – were also been postponed, again with dates to be finalised later in the season.
In the Third Round of the Coral Challenge Cup, four of the six ties scheduled for Sunday afternoon were postponed – and in three cases they have been rearranged for this Sunday afternoon (February 16). The only exception is the game between Rochdale Hornets and York Acorn, which is expected to be played during the following midweek.
The fourth round draw will be made tonight (Monday evening) at The Shay in Halifax, with the 13 English clubs in the Betfred Championship, and the five winners of Saturday’s Third Round ties – North Wales Crusaders and Doncaster of Betfred League 1; Siddal and Leigh Miners Rangers of the National Conference League; and, for the first time in their history, the British Army, who claimed a famous victory over Ince Rose Bridge in front of the Our League cameras, also joining the clubs going into the draw.
It means three of this weekend’s five Betfred League 1 fixtures will have to be rearranged – Newcastle v West Wales, Keighley v Hunslet and Workington v London Skolars. That will leave the stage clear for North Wales Crusaders and Doncaster, and Coventry and Rochdale to kick off the League 1 season.
The draw will be broadcast live on BBC Sport from 6.30pm.
NCL Premier League club Underbank, who had made the lengthy journey to Llanelli from their Holmfirth base on Saturday, were relieved to find that their tie against West Wales Raiders went ahead, and they shocked their hosts with a 30-8 victory.