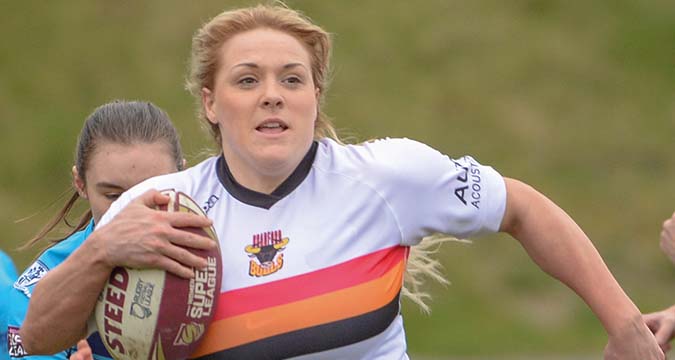 St Helens Women will have even more international experience in their ranks when the season gets underway after signing Amy Hardcastle from Bradford Bulls.

The 31 year-old centre or winger has scored 14 tries in 17 games for England since making her international debut in 2009 and has represented her country at both the 2013 and 2017 World Cups.

She was also recently named in the team of the decade selected by the NRL – the only England player to be recognised.

Hardcastle, who is currently working on the frontline of the Coronavirus pandemic as an A&E health care assistant at Calderdale Hospital, has her eyes set on taking part in a third successive World Cup in 2021, and feels this move across the pennines will allow her to do that.

“I want to take this new opportunity to continue my progression in rugby league and to find the best version of myself by reaching my full potential ahead of the World Cup,” said Hardcastle.

“I believe I can achieve this at St Helens and I’m looking forward to this new chapter.

“My mum’s always says it’s not where you start it’s where you finish.”

On her signing, St Helens Women’s head coach Derek Hardman added: “I am delighted Amy has decided to join us ahead of the new campaign.

“She has years of experience having played in two World Cups and that can only benefit our group moving forward.

“We welcome her with open arms and we are excited to work with her when the season gets going.”

Hardcastle captained the Bulls to a sixth-placed finish last season, and he departure comes just weeks after it was confirmed coaches Kirsty Moroney and Beth Sutcliffe had left the club.

“The club would like to place on record its thanks to Amy Hardcastle for her incredible service over the years in a Bradford shirt and wish her all the best in the future,” added the Bulls.