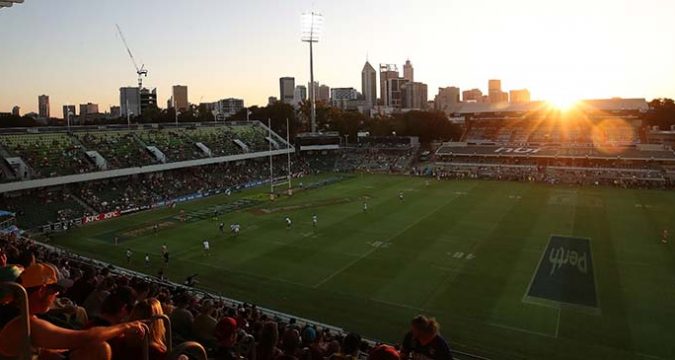 There were plenty of shocks, blow outs and quality tries on show in the opening day of the NRL 9s with each side featuring once before the second round and the knockout stages are played tomorrow.

Penrith Panthers got the day underway with a dominant victory 35-0 over Sydney Roosters with Viliame Kikau notching two tries in a starring role.

Then Newcastle Knights blew out another scoreline against New Zealand Warriors. Kurt Gidley starred as the Knights earned a 34-0 win in the second game.

Canterbury Bulldogs were able to shock the Perth crowd with a 13-10 upset against Parramatta Eels. The Eels brought a star-studded squad including World 9s player of the tournament Mitchell Moses but a late try from Corey Harawira-Naera earned the Bulldogs a rare 9s win.

Tristan Sailor starred for St George Illawarra Dragons as they ran out easy 27-5 winners over Cronulla Sharks despite an early try from Sione Katoa for the Sharks.

A Justin Holbrook-led Gold Coast Titans beat a young Canberra Raiders side, featuring only Elliott Whitehead from an English point of view. Michael Gordon, who retired at the end of last year, was among the try scorers for the Titans.

Wests Tigers beat South Sydney Rabbitohs 17-8 with all three of their tries coming in the first half including one for Billy Walters, son of all-time great Kevin Walters.

The penultimate game saw North Queensland defeat local rivals Brisbane Broncos 17-11. Two tries in the second half from Scott Drinkwater and Hamiso Tabuai-Fidow saw the Cowboys turn around a 7-5 deficit at the break.

A double from Luke Matcalf helped Manly Sea Eagles beat Melbourne Storm 18-4. The Sea Eagles dominated throughout with Metcalf opening the scoring and Reuben Garrick adding to that with a penalty try. Cameron Munster notched for the Storm before Metcalf scored again to seal Manly’s win and end the men’s round of fixtures on day one.

For a full round up and report on the Final, check out League Express on Monday