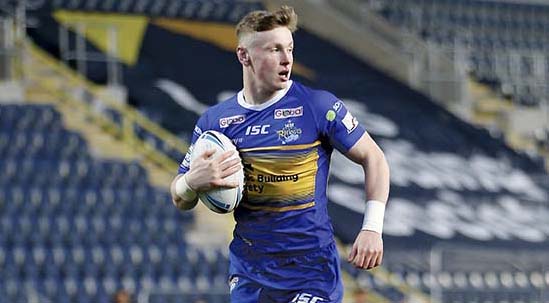 The following set, Cameron Smith picked up the scraps from a challenging Hurrell kick. Gale kicked all three conversions, and later kicked Leeds into a 20-point lead with a penalty.

Rovers did go over moments before half-time, as Greg Minikin finished off a string of passes. The conversion was missed, providing Leeds with a three-score advantage at the break

Seven minutes after the interval, Jack Walker scored a brace, after he broke a tackle, stepped inside two defenders and raced his way over.

Moments later, Ash Handley finished a breathtaking counter attack, after being set up by Harry Newman on the half-way line.

The 58th minute saw another four-pointer as Smith enhanced Leeds’ lead. He received a ball from Jack Walker and went unopposed. Gale continued his impressive record, kicking all three goals.

On the 66th minute, Rovers did go over as Leeds’ ill-discipline gave valuable field position. Jordan Abdull pounced on a bouncing ball in order to score, with Ryan Brierley nailing his first conversion.

Immediately after, Hurrell eventually got on the scoresheet, slamming down an attacking kick. The Rhinos crossed two more times in the final two minutes through Richie Myler and former Rover James Donaldson.