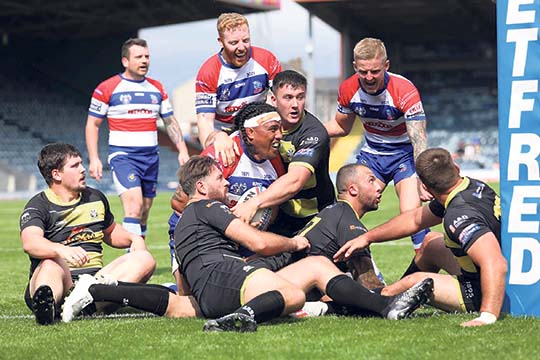 It’s an old cliché, but an accurate one nonetheless – you look at the world differently when you become a parent.

That became personally relevant for the first time in Rugby League terms last Sunday when I took my six-year-old son Leo along to watch my boyhood club Rochdale Hornets in their League 1 match against North Wales Crusaders.

It was far from Leo’s first Rugby League experience. He wasn’t yet a year old when we took him to see England against New Zealand at the Olympic Stadium in 2015 (and understandably fell asleep during the drab 2-9 defeat) and he has been to every Magic Weekend since then.

He’d also been to Hornets before, when he was aged around four, but was just too young to fully take in everything that was happening on the field.

Covid has denied families across the country the chance to take their children to sporting events for an extended period and Leo was no different, although he did develop a near addiction to the NRL during the first lockdown when all eight matches were on our TV every week.

But last Sunday felt more like the first time he could be at a live game with an appreciation of what was going on, and as such, there was an element of dad’s nerves over how much he’d enjoy it.

I was taken to Hornets from being around five years old and pretty much fell in love with the sport straight away, despite the crumbling terraces at the old Athletic Grounds and the lack of many other children around.

But this is a different world now, one where Leo can watch back-to-back top level sport on TV 24 hours a day, be it Premier League football, IPL Twenty-20 cricket or the NFL, all of which have had him engrossed at various times.

So, League 1 Rugby League is up against it from the start in the eyes of a six-year-old, which I was acutely aware of when pulling up to the ground.

It was the first home game Hornets had been able to welcome fans to in over a year after an extended period on the road for pitch reseeding, and the club had run an extensive campaign with local community teams offering free and reduced tickets.

The previous time they had hosted the Crusaders – back in 2015 – the crowd was 530, and it would be fair to suggest the number of children among them would have been minimal.

Last Sunday, 1,389 were present, including a host of junior teams in their full kits, which made for a terrific atmosphere, and one much more welcoming for a wide-eyed six-year-old.

More than that, when the game finished, it was noticeable how long the home players spent talking to fans at the front of the stands, which was not lost on Leo.

Every young boy or girl needs heroes to look up for, and I’d spent the drive over explaining who debutant Rangi Chase was and how exciting he would be to watch, which he certainly was for the 15 minutes or so before he broke his arm.

Would that setback affect his enjoyment or divert his attention?

Step forward Fuifui Moimoi. Instantly recognisable, the former NRL star, who is still playing at 41, rolled back the years with two tries and instantly earned a new fan.

Rochdale certainly aren’t the only club to see the value in having young fans in the ground, not even in League 1, where Barrow’s free entry campaign saw a bumper 3,146 turn up for their local derby with Workington on the same day.

And one of the best videos on social media this week had four young Town fans – in full kits – walking down the road after the game singing “Oh Worky, Worky”. Brilliant!

Other clubs have also run various promotions in recent times.

If those young fans see a vibrant and exciting atmosphere when they attend Rugby League matches they are much more likely to want to return.

And the highlight of my own week came on the school run one morning, when Leo asked, unprompted, “Can we go to Hornets again this week, dad?”