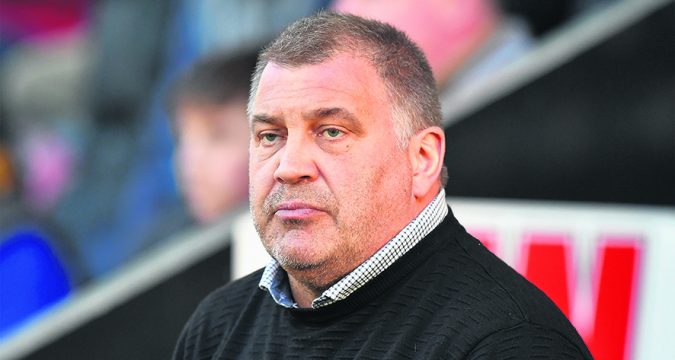 England coach Shaun Wane has given some insight into the thinking behind his selection of a 24-man squad from which he will select the England team to play the Combined Nations All Stars next Friday night at Warrington,  including why he has not selected certain players who have performed well so far this season.

“James Roby not in the squad, even though he’s playing great, but I don’t think he needs a game as intense as this,” explained Wane.

“Gareth Widdop’s form has been superb. He is close and I rate him very highly, while Zak Hardaker is suspended.”

But Wane is happy to focus on some players who look likely to get a chance to shine for England, even if their opportunity has come belatedly.

“Paul McShane is a player I’ve long admired, who always gave us problems when Wigan played Castleford. He’ll be wanting his chance and we’ll see that next Friday.

“He never got the recognition he should have. He’s a real good kid, I’m excited to see how he kicks on. He’s got his recognition late, but every time Castleford have played well he’s been outstanding.

“Mikolaj Oledzki is a great kid who wants to learn and improve and he’s very competitive. He has good leg speed and I’m excited to see how he does.

“Joe Westerman is a form player in Super League; he’s at the back end of his career, but it’s a great message to everyone in Super League that if you give us the data we need, then you have a chance of being in the World Cup.

“Jake Wardle is ready and I won’t have any qualms about putting him in.

“And Tom Davies is a great young player who tries really hard and does all the right things. He was like an enthusiastic puppy when I telephone him to tell him he was in the squad and it was a great phone call.

And Wane is confident that George Williams, who is currently without a club after leaving Canberra Raiders recently, will be ready to play if selected.”

“I have no stress about George coming in,” said Wane.

“I’ve spoken to him every couple of days, he’s a strong minded kid who can get over things quite easily. He’s flying back and can’t wait to join the lads.

“He’s a great player, but he still needs to improve. Continuous improvement every day is what I’m seeking and George understands the sort of environment he’s coming into.

The team we put out will be very strong and to coach against Tim Sheens is a massive moment for me and my coaching career.

“I wanted a proper, tough Test match and he’s been easy to work with, an absolute gentleman. I’m looking forward to pitting my wits against one of the best coaches in the world.

“I’m going into this match with the same attitude as when I coached at Wigan. I want players who try hard, listen and do the business on the field. There is a ruthless element to this and they know that if they don’t deliver, then they won’t be in the team.”