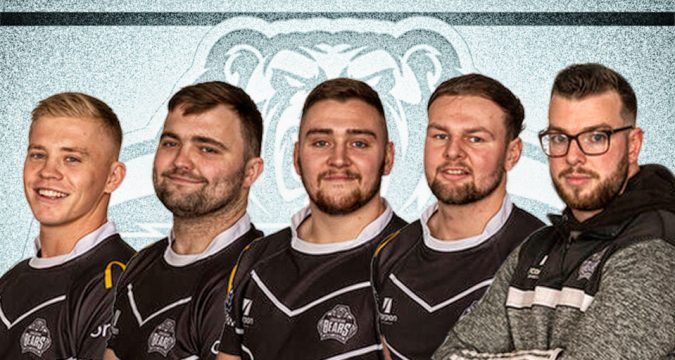 At this point, you would be typically confronted with another ‘Sent to Coventry’ headline, but we will spare the clichés this time around. That would have been the perfect start to a feature on the Bears’ Hull contingent who have been, shall we say, ‘dispatched to the West Midlands’ to fight the Rugby League fight.

Ahead of the current campaign, the Bears called upon a core of five players from the two-team city, as well as promoting assistant Richard Squires to head coach, who previously worked as Community Development Officer at Hull FC and coached the Hull University side.

Among those players are Hull KR’s former towering forward Brad Clavering and ex-Featherstone, Hunslet and Doncaster stalwart Liam Welham, the latter of whom was out of the game after a move to Keighley Cougars fell through in 2019.

Adding to that experience is a dynamic trio of former England University internationals as the Bears look to unearth their next gem, just as they had done with St Helens’ Joe Batchelor in 2016.

That trio come in the form of fullback Nathan Hill, who arrived after a spell with Rockingham Sharks in Australia, former Keighley and Hemel Stags halfback Kieran Smith and Ryan Langton, an ex-England Youth international who currently heads up Hull FC’s educational team alongside Welham.

Education has been at the epicentre of their involvement with the club, with Hill and Langton both featuring for Squires’ Hull University side and the clear links to Hull FC’s Community set-up, as the Midlands club look to continue their learning experience as a League 1 entity.

Lessons have already been learned from early season defeats to competition heavyweights Newcastle Thunder and Barrow Raiders, with the travelling Hull party at the heart of that process.

“They’re already making kids come on leaps and bounds,” Squires told Total Rugby League. “We had a tough start with Newcastle and Barrow; they could be the top two.

“It’s been worthwhile bringing them in. They’ve taken people with them. It’s probably something the club haven’t had, in previous years, with experience across the board.

“It’s quick taking back for the young lads at the club. Our local lads saw it as competition for places for them at first, but now they’ve seen how much they can actually learn from these guys.

“They’ve all got a big role off-the-field too for us, we’ve got a leader in each department. Kieran in the halves, Clav leading the pack, Welham and Langton in the outside-backs and Nathan at fullback.

“I know that these guys think the same as me and it makes the transition easier on the field, when I want to make changes to how we play. The message gets across before I even had to say it.

“At half-time of the Newcastle and Barrow games, they were the voices that were saying what I wanted to say. It’s better coming from players and the guys from Hull have brought that voice. They’ve all got big roles to play in the education of the game down here.”

While their presence in the side has been a major boost for the Midlands-based members of the squad, Squires was quick to highlight how the benefits of the move are easily reciprocated.

With all five of the Hull-based squad members turning to the amateur game, or Hull FC reserves, after falling out of the professional ranks, the Bears acted as a preservation stop for all concerned.

Despite the East Yorkshire city being one of the well-known Rugby League hotbeds, with Super League sides Hull FC and Hull KR, Squires was quick to point out that only Featherstone, Doncaster and York lie within an hours’ travel outside the top flight.

That has led to a growing number of high-quality players, in the city, who drop out of the game entirely, as clubs like Coventry look to export their talents to one of the sport’s developing footholds.

“I’ve been joking with Brad Clavering all season about the fact they nearly stopped playing.,” Squires added. “If you could set up a League 1 team on the outskirts of Hull, your team would be class. Just from picking up the pieces of Academy players who are released and players from the Student game.

“There’s people playing in the amateur game in Hull who, if you could get to play around work commitments, would go straight into any League 1 side. I was at West Hull and I’d say that 10 of the starting XIII were League 1 quality.

“People like Brad, Ryan, Kieran and Nathan would be the sort of player who falls out of the professional game because there’s not the opportunity for them to continue.

“I’d identified Ryan early on as someone I wanted to sign. Since he’d been released by Hull FC, at 18, he’s always had the potential but never actually committed. It’s the same with Nathan Hill, he killed it in Australia and it’s only really his physical stature that stops teams from looking at him.

“Brad Clavering made contact with me and asked to be a part. He was offered a few Championship contracts, but he’s working on building caravans and that takes precedence for him. We were able to accommodate him and having his Super League experience is huge for us.

“Kieran Smith has been around the game for a while now and it made sense to get a couple from Hull and then fill a car. That way, they could take turns and the travel demands wouldn’t be as bad for them.

“Liam Welham was a late addition. The wealth of experience he’s got, it’s massive for a club like us. He was at Myton Warriors as player-coach. I got a message out of the blue and he asked me what my plans were for next year. I thought he was joking, at first.”

Squires’ initial doubts about the seriousness of the proposals of the likes of Clavering and Welham is understandable, given their calibre as players and the travelling involved in playing for the club.

As shown with the club’s loan move of Kieran Moran, another Hull-born player, from Keighley Cougars earlier in the season, the demands of the trip to Coventry are not too distant from some of the established towns on the M62 corridor.

“On a good day, they can do it in two and a half hours,” Squires explained. “People are shocked when they say they travel to Coventry, but we had Kieran on loan from Keighley and it takes him the same time to travel there.

“Last year we had a lot of travellers who came alone. When you’re finishing training on a Thursday that’s a lonely place to be. Let me tell you though, that car back to Hull has some characters in it. There will never be a boring car journey.

“We had a conversation with them all in pre-season, I told them that I knew exactly what their ability was but other people around the club and Alan (Robinson, director of rugby) doesn’t. I took a leap of faith with them, and so far, it’s paid off.

“They committed to twice a week during pre-season and came down every Tuesday and Thursday from Hull. During the season, Brad would train Thursdays for instance because of work, but the other guys trained twice a week. I can’t doubt their commitment one bit.”