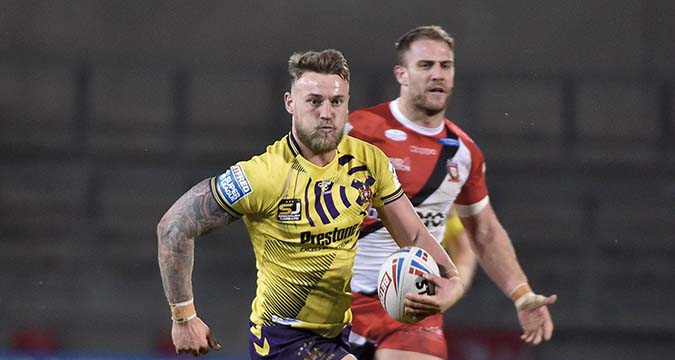 Three Wigan Warriors players are set to leave the club for the 2021 season.

League Express understands that Mitch Clark, Chris Hankinson (pictured) and Josh Woods have all been told they can pursue moves elsewhere for the upcoming campaign.

The trio are all under contract with the Warriors next season but, as is proving to be the case across Super League, the club is trying to trim its squad ahead of the upcoming campaign and the trio are all being made available on loan deals.

Executive Director Kris Radlinski told League Express earlier this month that the club may run with a smaller squad next season, and work is now underway to make that happen.

Clark joined the Warriors ahead from Castleford on a three-year deal ahead of the season but has struggled to break into the side, making just nine appearances from the bench this year.

Goalkicking centre Hankinson is entering the final year of his contract, but played just three times this season, with the form of Zak Hardaker and Oliver Gildart keeping him out of the side.

Halfback Woods is also on the lookout for playing opportunities, with the retention of Jackson Hastings, the emergence of Harry Smith and the arrival of Jai Field suggesting his playing opportunities will be limited at the DW Stadium next year. He started the season on loan at Leigh but featured once for Wigan following the season restart.

“We might go into next season lighter with regards to numbers because there are still uncertainties with Covid,” Radlinski said.

“Will we be paying for testing? If so that’s £120,000 we have to find. We have reduced Sky money next year and we’re still unsure on the return of crowds and the impact on sport and the club.”