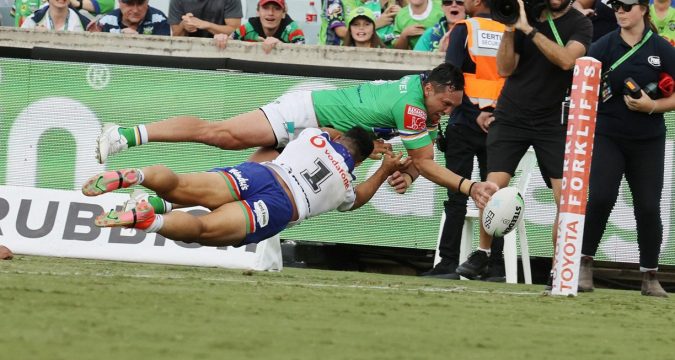 New Zealand Warriors fullback Roger Tuivasa-Sheck pulled off a remarkable last-second tackle on Canberra Raiders’ Jordan Rapana to prevent him snatching victory for the Raiders in Saturday’s 34-31 victory for the Warriors at GIO Stadium in the Australian capital.

Tuivasa-Sheck (above, photo supplied by NRL Images) dislodged the ball from Rapana’s grasp as the Raiders’ star looked certain to score, securing the Warriors’ second victory in the first three rounds of the NRL competition.

It was the New Zealand club’s biggest ever comeback victory after they were trailing 31-10 on 50 minutes, although the Raiders had suffered three injury blows early in the game, losing Joe Tapine (ankle), Ryan James and Sebastian Kris (head clash) in the first ten minutes and they were clearly running out of energy in the second half as they slid to their first defeat of the season.

In the other two games on Saturday, Brisbane Broncos got off the mark for Kevin Walters’ first win as coach, overcoming the still winless Canterbury Bulldogs 24-0, while Parramatta Eels retained their 100% record with a 28-4 victory over the Cronulla Sharks.