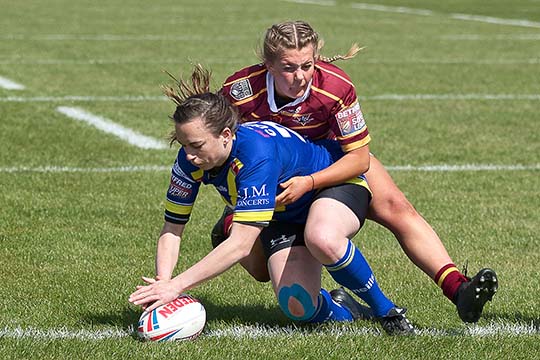 After a wait of 638 days, the Women’s Challenge Cup swung back into action on Sunday with two first round ties in a double header at Warrington’s Victoria Park.

The two new faces in Super League – WARRINGTON WOLVES and HUDDERSFIELD GIANTS – got the event underway behind closed doors, before last season’s Super League bottom two YORK CITY KNIGHTS and WAKEFIELD TRINITY also battled it out for a place in the next round.

Having got their season underway last weekend with a defeat to Wigan Warriors, it was Warrington that started the game brighter than their opponents, who hadn’t played since the 2019 season came to an end.

The Wolves saw a couple of early chances go begging before a charge down the centre of the field by forward Armani Sharrock led to Dani Bound getting a neat ball out to Bryony Coombs to cross. Captain Michelle Davis converted for a 6-0 lead after 10 minutes.

Huddersfield’s lack of game time was showing as numerous errors repeatedly handed Wolves possession and they certainly made the most of it with four tries in the last quarter of the half.

A goal-line drop-out gave Coombs the chance to run at the Giants’ defence before Amy Daniels powered through for a try and the lead was further extended when a Sammy Simpson break down the right saw Georgia Sutherland collect the play the ball and race in to score.

Davis missed all four conversions, but the Wolves led 22-0 as half-time approached.

But the Giants weren’t completely out of it because, as the hooter was about to sound, Reagan Walker put Bethan Oakes through, before then converting her captain’s score.

That late try seemed to spur the Giants on and they’ll have felt they had a chance to fully get back into the game after teenage winger Amelia Brown took a pass from Erin Stott to race through. Walker’s second conversion made in 22-12 with almost the full second half still to play.

Warrington weren’t going to give up that easily though, and when they forced the Giants into making an impossible offload they took full advantage with Dani Bound going in from dummy-half.

The Giants kept piling the pressure on, but they couldn’t make it pay and tries in the final five minutes from Simpson and Coombs gave the Wolves a 38-12 victory.

The second game was a much closer affair, with York hitting back in the second half to see themselves through.

It was Wakefield who started on fire though, racing into a 10-0 lead inside ten minutes.

Evergreen centre Lisa Taylor opened the scoring when she crossed under the posts to give herself a straightforward conversion and five minutes later a crossfield kick by Wakefield was pounced on by debutant Dani Green.

The early setback didn’t deter the City Knights, however, and they soon found themselves dominating field position and possession, but were unable to turn that into points until the final minute of the half when Olivia Howarth crossed for York. Mel Halstead added the goal.

The two sides continued to battle hard after the break with very little to separate them as the second half wore on.

But with six minutes remaining York got the breakthrough they’d been looking for when Alex Stimpson found her way over from 50 metres out to level up the scores.

Stimpson was at it again a few minutes later with another long range effort from the substitute giving the Knights for lead for the first time. Halstead added her second conversion of the afternoon to seal the win.

The Coronavirus pandemic has seen the competition take a new structure this year, with only the ten Super League clubs taking part.

Warrington and York will now join holders Leeds Rhinos and the other teams that finished in the top six in 2019 – Bradford Bulls, Castleford Tigers, Featherstone Rovers, St Helens and Wigan Warriors – in the draw for the quarter-finals, which takes place at leisure resort Ullswater Heights on Wednesday evening.