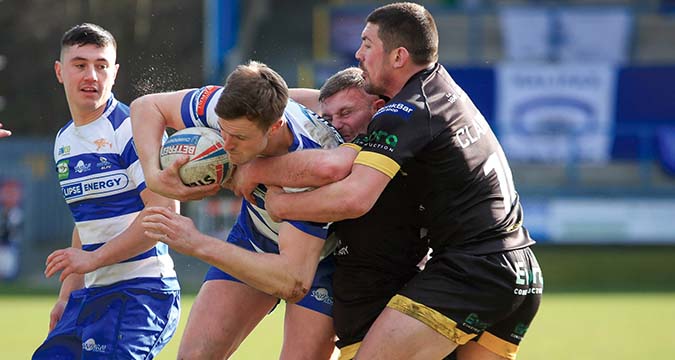 Toronto Wolfpack are set to add Halifax forward Paul Brearley to their squad in 2021.

League Express can reveal the Wolfpack are close to finalising a deal which will see the towering forward join the Super League club next year.

Standing at 6′ 7″, Brearley only started playing professionally last year after he earned a contract with Batley Bulldogs following a successful trial.

A former Rochdale Mayfield captain, Brearley caught the eye for the Bulldogs with his strong carries and offloading ability.

After scoring six tries in 25 appearances, he made the switch to Halifax ahead of this season to work under Simon Grix, a former backrower himself.

He scored once in five appearances for Fax before the lockdown, but his meteoric rise is now set to continue with the Wolfpack next season, going from amateur to the top flight in the space of two years.

He is Toronto’s second signing from the Championship ahead of 2021, with Brearley set to join Toulouse’s James Bell in Brian McDermott’s squad next season.

Deals for Ryan Hall, Stevie Ward, Richie Myler and Ben Flower are all thought to have been completed for next year too.

Thompson, 31, joined the club last season and has gone on to make 27 appearances for the club, scoring five tries.

A Super League Grand Finalist with Warrington in 2018, Thompson is believed to have signed a multi-year deal with the club and joins the likes of Gareth O’Brien, Matty Russell and Anthony Mullally in committing to the club.