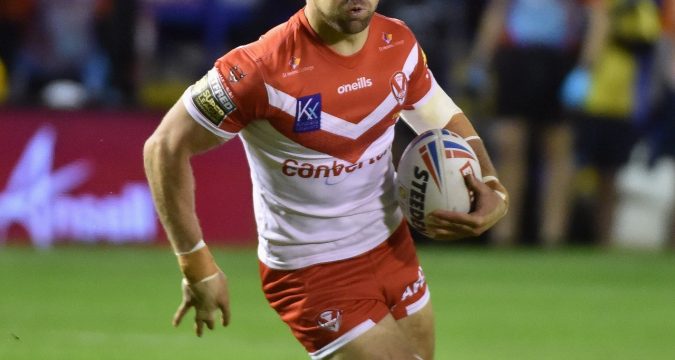 St Helens coach Kristian Woolf is sweating over the extent of Tommy Makinson’s foot injury after a sweet and sour Challenge Cup clash with Huddersfield on Friday.

The 23-18 win at Emerald Headingley, which made it seven out of seven for Saints this year and put them into the semi-finals, was a tale of two wingers.

Woolf was able to reflect on a hat-trick by Regan Grace just days after the much-admired Welsh wonder signed a new contract covering next season.

But he is also awaiting further information on England ace Makinson, who lasted just three minutes of his first appearance in three matches.

Woolf was confident the 29-year-old was over the problem picked up during the 34-6 home Super League win over Wakefield on April 16.

“I think it’s the same injury, but there are no questions as to whether we brought him back too early,” he insisted.

“He trained fully all week and has done everything we have asked of him. If we wanted to, we could have pushed him to play last week.

“Instead, we thought we would be smart and give it an extra week, so we are certainly not questioning anything there.

“He has a bit of a drama there and we need to have a good look at it and find out what we are going to do with it.”

Meanwhile, prop Louie McCarthy-Scarsbrook will be assessed during the build-up to Monday’s home Super League meeting with Salford after a head knock.

Wales international Grace, 24, now has 73 tries in 117 appearances since making his Saints debut in 2017 after playing for the Academy side the season before.

Woolf confirmed there had been interest from rugby union in the Port Talbot-born flyer, who played for Swansea-based Ospreys at junior level, explaining: “I know it was there.

“With the history of rugby union in Wales and a player of his sort of talent, then it was no surprise whatsoever that clubs had a look.”

While fans are disappointed his new deal isn’t for longer, Grace said: “It is right for me. I am happy. A one-year extension keeps me on my toes and keeps me playing my best.

“Hopefully we can win the Super League again this year and win it again the following year. I am here to win things, that is my main goal.”