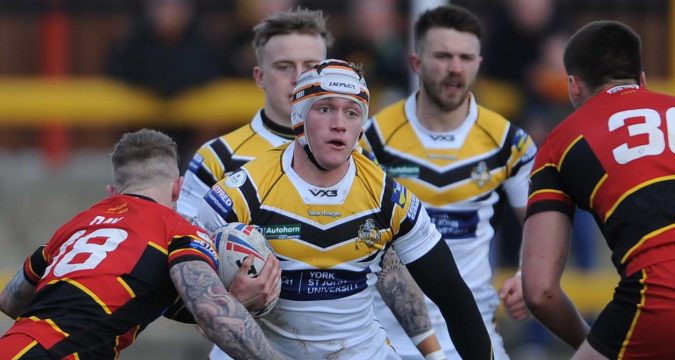 Rugby League players can often be role models for their local communities, and few illustrate that quality more than York City Knights hooker Will Jubb.

The 24-year-old was diagnosed with retinoblastoma in his right eye at the age of two, after his mum noticed that one of his pupils had a white glow in a photograph.

After visiting the optician and having numerous tests at the hospital it was confirmed that the cancer had grown to the point where Jubb needed to have his eye removed.

But he and his family were determined that would not prevent him from playing sport, and having taken up Rugby League at the age of 10, he was picked up by Hull KR’s scholarship system, and progressed through their Academy and the City of Hull venture to play first-team for the Robins.

After being loaned to York City Knights in 2017, he ended up permanently in the Minster City, which is where his current work in the community comes in.

Jubb has become an ambassador for the Wilberforce Trust, who offer children with visual impairments opportunities that they might otherwise be excluded from through their programme Club Wilder.

It’s something that the Knights hooker is clearly passionate about.

“It’s an organisation that helps people with sight problems and puts activities on for them,” he explained.

“They get people out and about doing different things to show them that things don’t have to hold them back.

“They asked me if I wanted to help out because I lost an eye to cancer when I was young, and I’ve grown up only having one eye since I was two.

“As soon as I heard about it I wanted to get involved and help out, because everyone was great with me growing up and getting used to everything.

“Anything little I could give back I wanted to do.

“I want to be a role model to the kids to show them that sight problems shouldn’t hold them back from anything they want to do.

“I have been able to do everything I wanted to do, and it has never stopped me, so I want to inspire them to chase their dreams, not just in sport but in all aspects of life.

“I want to be proof that they can succeed and achieve whatever they set their minds to and Club Wilber is a brilliant way to include the kids and show them that it is possible to do these things.”

Jubb’s own inspirational story made headlines in the national media last week ahead of the Knights’ Betfred Challenge Cup clash with Sheffield on Friday night.

“I can’t remember what it was like having two eyes, I grew up not knowing anything else,” he explained.

“I had my family throwing a ball at me, especially my dad, all the time when I was little and I just got used to it.

“I didn’t play rugby at first, it was always football, but my brother was playing, so I gave it a go and played prop at first before ending up at hooker.

“Sometimes there were times I couldn’t see somewhere, but you learn to turn your head more and take more of a look, and adapt as you learn.

Basically you’re trying to stop yourself getting hurt.”

Asked whether it was an issue with other children growing up, Jubb responded: “You couldn’t really notice it when I was younger.

“We went to the National Artificial Eye Service and they were absolutely brilliant – basically the eye looks exactly real, you’d have to have a proper look to see it.”

Off the field Jubb is completing a science and conservation PhD with a view to potentially lecturing in the future. On the field he is a key part of an exciting York side that impressed against the Eagles on Friday night.

He added: “I absolutely love the place and playing in front of the fans here, I can’t wait until they come back, especially in the new stadium.

“It’s a club that means a lot to me. Since I’ve come here it’s really been on the up, with the new facilities and winning promotion from League 1.”