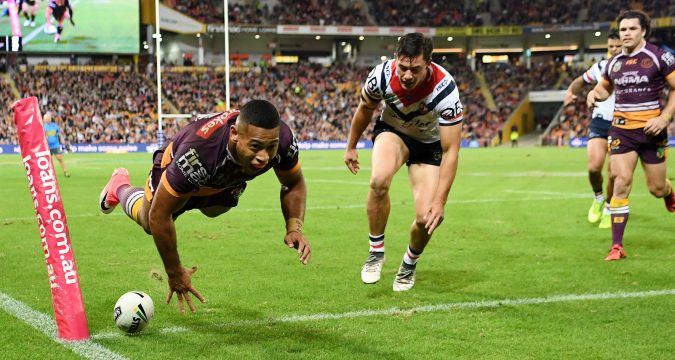 The Broncos were on top early, forcing repeat sets on several occasions. The pressure told when a spread to the left found Kotoni Staggs. The young debutant caught and passed quickly to Corey Oates to finish.

The Roosters earned their way back into the game when Latrell Mitchell set Joseph Manu away. The winger found Luke Keary on the inside who had the simple task to finish.

But Tevita Pangai jnr set up Brisbane’s second try when he offloaded to Staggs who did well to score on debut after shrugging off tacklers.

It didn’t take long for the Roosters to respond. Mitchell again did well to fend off James Roberts and offload to Keary who finished once again.

Brisbane again took the lead after the break. This time Roberts got the better of Mitchell. The speedster then assisted Isaako.

The game turned on its head once again. This time it was Isaac Liu, in good try-scoring form, who put the Roosters back in front.

Sydney kicked on. Keary kicked in behind the Broncos for captain Boyd Cordner to extend the Roosters’ lead. Mitchell’s kick hit the upright leaving the score at 22-16.

The battle between Roberts and Mitchell went up another level when Roberts took the ball in centre field in his own half. He ran around the entire left edge and stepped inside Tedesco to score.

With the game level and with five minutes to go, Dylan Napa was put on report and sin-binned for leading with the head when tackling Korbin Sims.

Three minutes later, Isaako dummied to kick a point and came out with six when he stepped through and beat multiple Roosters defenders.

Tevita Pangai jnr was sin-binned with seconds to go for a professional foul but the Broncos held on.