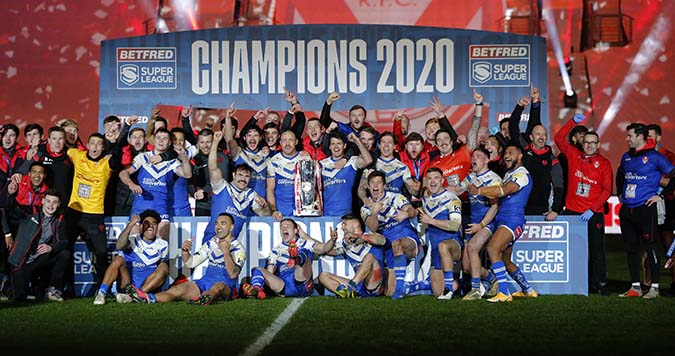 The final seconds of the Super League Grand Final were surely what great sport is all about.

The result is in the balance and something incredible happens to settle the outcome, making an instant star of young Jack Welsby for St Helens and creating contrasting scenes of joy and despair among the St Helens and Wigan players.

To describe it as magnificent is, if anything, to understate how good it was.

And it was gratifying to see that there were so many people on social media who were not regular supporters of the game, but who watched it and could recognise the quality of what they were watching.

Probably the most notable was boxing’s former world champion Tony Bellew, a Liverpudlian and Everton supporter who tweeted several times during the game.

“Watching this rugby and these lads are quite simply hard as nails! Seriously powerful and talented athletes who can’t half shift!! I’m not very clued up on this sport but I do understand enough to know that it’s fierce and some game!

“What is going on in this game?? My heads fell off if they’ve just won it with this… wow is all I have to say! Well done to Jack Welsby! Truly amazing finish that is!

“Really enjoyed that! Proper mushes! 100% I’ll be attending be of these when I get a chance! Unbelievable that it really really was! Congratulations to the Saints they deserved it imo..”

The following morning Bellew tweeted again about the game, which we’ve reproduced as our Tweet of the Week in this week’s League Express.

It’s wonderful to see the Grand Final making such a big impression on him, but in a sense it’s amazing that someone from Liverpool doesn’t already know a lot about Rugby League when he’s so near to some of the biggest clubs in our sport.

People always tell me that Liverpool is a special case and that there’s only one sport in town there, and I can understand that would be true.

But it’s still a mystery to me as to why it should be so.

Meanwhile I saw an article about Rugby League on one online newspaper site that had comments from readers printed below, and one of them caught my eye.

“I am an Essex boy and support St Helens, I could not tell you the name of a single Saints player,” it said.
That suggests to me how much work we have to do to get our leading players better known by the sporting public.

After the game, Sky viewers would have seen an interview with St Helens Chairman Eamonn McManus.

Eamonn was clearly in a state almost of disbelief at what he had just seen unfold, but I thought he spoke superbly in paying tribute to all the players, and not just St Helens players, who have played in Super League this season, and I spoke to him personally to ask him to expand on those views.

“I want to say to all the players in Super League, particularly from Saints and Wigan, what a fantastic, remarkable job they have done when faced with salary cuts, a two-month extension to the season and the oppressive coronavirus,” he said.

“It was an unusual arena, to put it mildly, but just shows what a remarkable sport Rugby League is.

“The whole thing was an out of body experience.

“By any stretch of the imagination, it was 79 minutes of some of the best Rugby League I’ve ever seen, following a minute of absolute insanity.

“There were a lot of key moments in the game, but one of them was Jonny Lomax running it out 40 metres after Zak Hardaker’s failed penalty attempt with a minute to go to put us starting on the half-way line. And from there we somehow won the game.

“Rugby League players are not brilliantly compensated to start with, so to go through what they’ve had to go through is quite incredible.

“But they did it, and in the end their professional standards were probably higher than we’ve ever seen before.

“More than any other sport, we should be thankful for our players.”

I couldn’t agree with him more.

How far should technology go in Rugby League, in an attempt to always get the right refereeing decision on the field?

I’m asking the question because reports coming from Australia suggest that the NRL is examining new technology in an attempt to solve one of Rugby League’s oldest problems.

Apparently they have begun initial discussions with an English technology company with a plan is to implant small microchips into match balls, which would then allow referees to rule instantly on a forward pass.

NRL head of football Graham Annesley said of the technology: “Its the most promising development of its type I have seen.”

Discussions are still ongoing, but the technology could apparently be approved by 2022.

Each player would have a small transmitter fitted alongside the GPS tracker they already wear. Receivers would be installed around the ground, which would transmit information to a computer.

The NRL is not revealing which company they are working with, because if the technology works it has massive financial implications for both the game and the company. It would almost certainly be used in both codes.

The hope is that the new technology will tell referees whether players are onside or offside at kick-offs and in which direction the ball comes out of a player’s hands.

It’s all well and good, but I worry about Rugby League going so far down this route.

We have already seen the creeping power of the video-referee, for example, which I was strongly in favour of when it was first introduced, but about which I have far more doubts these days.

In football, for example, I would be interested to know what proportion of supporters are really happy with the impact of VAR technology.

In 2015 the Catalans Dragons gave a debut to a teenaged halfback called Lucas Albert, who looked like being the best halfback to come out of France for many years.

Since then Lucas has been on the fringes of the first team, without ever being able to displace the overseas players who normally occupy the halfback slots for the Catalans.

And last week the Dragons revealed that he will be leaving the club to play for Carcassonne in the French Elite League.

In a nutshell, that story illustrates the Catalans’ biggest problem.

There is no way through the ranks for promising French youngsters when they are intent on signing overseas stars.

Somehow they have to find a way to nurture players like Lucas Albert to make him a star.