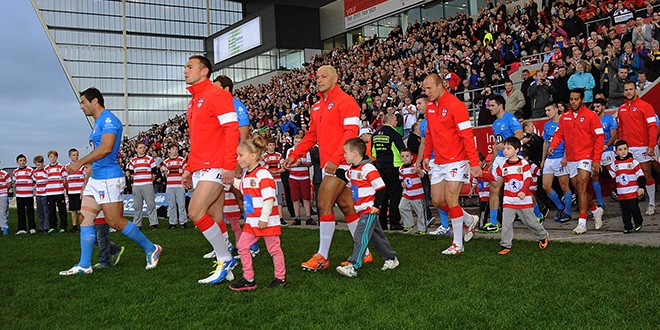 Aligned with the several million pounds of profit generated by the tournament, a more solid international programme was forecast and the establishment of a permanent staff for the Rugby League International Federation.

In the last few weeks very little has happened apart from Christmas, but the Rugby League International Federation seems to have gone back into its shell. As if to sum that up quite nicely, the last news item on the front page of the RLIF’s website is ‘Australia crowned World Champions’.

And don’t expect to find a section on that website devoted to fixtures, because there isn’t one.

Not that it matters too much. For as far as we are aware there aren’t any fixtures arranged for this year, yet alone beyond.

You’ll be heartened to know that talks are taking place on the schedule for this year’s Four Nations tournament that will involve the Big Three and either Fiji or Samoa. But we’ll all have to go down under to see any of that live. On English soil get ready for the usual, hastily arranged, low-key Home Nations tournament that doesn’t involve any high-profile stars.

Perhaps we are being a bit harsh on our game’s leaders and a blueprint for the global expansion of Rugby League is being finalised as we write. An eight-year plan, which includes all the nations in the last World Cup and those beyond, is perhaps about to be put in place. Fuifui Moimoi and Akuila Uate squaring up in a two-match series staged in Tonga and Fiji? It’s not too difficult to imagine the reaction to that in those countries.

We live, as always, in hope.

And in fact there is one international, of sorts, already planned – a game between the Philippines and ‘Latin Heat’, a team made up of Latin Americans. For those of our readers desperate for more international League, the game is being played on Australia’s Gold Coast on January 18.