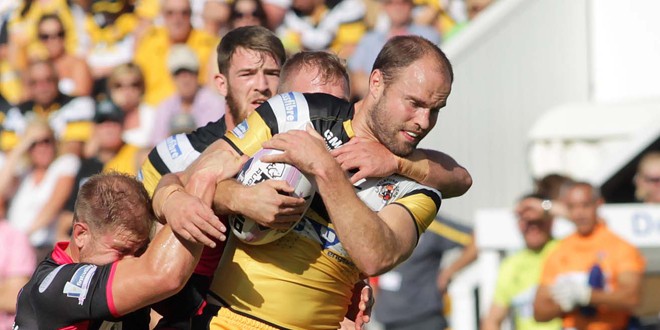 Castleford Tigers and Featherstone Rovers have named their squads for their pre-season clash at the Mend-a-Hose Jungle on Sunday for the ‘XBlades Prince of Wales Hospice Challenge Trophy’.

Daryl Powell has named a 20 man squad for a game, kicking off at 2.00pm, that will help raise funds for the Prince of Wales Hospice, with a bucket collection taking place at half time.

Tigers CEO Steve Gill said: “The Prince of Wales Hospice is one of the main charities we support year after year, the work they do is truly amazing. They provide such a great facility for our local community and we hope our fans dig deep to give a little to support this fantastic charity.”

Speaking on his squad selection, Tigers head coach Powell said: “The game against Featherstone is a fantastic opportunity for our new players to get a taste of the Mend-A-Hose Jungle for the first time, it’s also an ideal opportunity for our fans to get a good look at the new players and what they are going to bring to the team for 2015. We also have both young and experienced players looking to put a marker down early.

“Featherstone will provide ideal opposition and a flavour of close old rivalries.”

Rovers have announced a provisional 22-man squad, with head coach Andy Hay saying: “The squad will be reduced to 20 on Saturday morning but it’s a strong squad.

“We’ve got a number of players recovering from injury, but everyone who has been selected is raring to go and looking forward to the fixture. Pre-season is a tough period for players both physically and mentally. They’ve been training hard for 6 to 7 weeks looking forward to playing some rugby.

“Hopefully Rovers fans will make the short trip to Castleford and cheer us on. I wish all Rovers supporters a Merry Christmas and hope to see as many of you as possible after the game back in the Cappers Bar for the players Christmas party.”

A full report and photographs from Sunday’s game will feature in Monday’s issue of Rugby League Express.