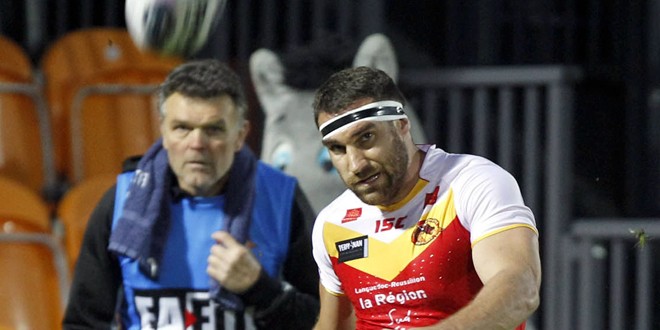 Catalan Dragons held off a fast-finishing Hull FC at the Stade Gilbert Brutus in Perpignan this afternoon to win a thrilling Super League contest.

Hull suffered a blow before the game when their hooker Danny Houghton had to withdraw after his wife gave birth, while they were also missing Liam Watts, who had lost his passport before travelling to France.

But on the other hand, they did welcome Tom Lineham back into their side after the current Albert Goldthorpe Rookie of the Year had been out of action for three months with injury.

The Dragons scored the opening try when Ben Pomeroy collected a last-tackle kick from Hull and fed Morgan Escaré, who sped 80 metres down the wing to score a thrilling try, with Thomas Bosc adding the goal for a 6-0 lead.

Michael Oldfield extended their lead when he collected a Bosc kick to the wing. Bosc couldn’t convert the try, but the Dragons had a 10-point lead after 17 minutes.

Jason Baitieri touched down on 25 minutes, but the try was ruled out for a forward pass from Ian Henderson.

Hull got back into the game on 34 minutes, when Gareth Ellis took the ball close to the Catalan line to burst over for his side’s first points. Jordan Rankin missed the conversion from the touchline.

Shortly before half-time, however, the Dragons scored again, when Benjamin Garcia forced his way over from dummy-half after a quick play-the-ball from Leon Pryce, with Bosc again adding the goal.

And the Dragons extended their lead after 46 minutes, when Pryce broke through and fed Daryl Millard, who scored in the left corner. Bosc hit the post with his conversion attempt.

Richard Horne missed a golden chance to put Hull back into the game when he dropped the ball in the act of scoring on 54 minutes.

Millard had a try disallowed when Lineham was pulled back as he tried to contest the ball.

And after 61 minutes Hull were back in it, when Fetuli Talanoa broke through and gave a great ball to Kirk Yeaman, who touched down, with Rankin adding a touchline conversion to cut the deficit to ten points.

And when Jamie Shaul scored three minutes later after great Hull passing and with Rankin adding the conversion there was everything to play for.

Sadly for Hull, they couldn’t manage to score the try that could have given them victory, but their coach Lee Radford will take plenty of encouragement from another strong performance by his side.

A full report, pictures and analysis will feature in Monday’s edition of Rugby League Express.