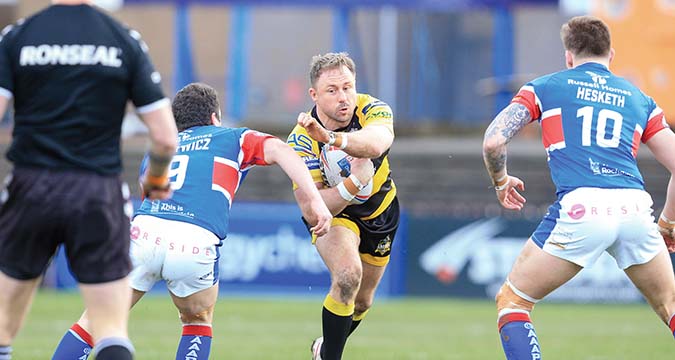 When the RFL issued a press release last Friday at noon, it brought plenty of welcome news for clubs outside the top flight.

Definite start dates to work towards, with an Easter kick-off for the Championship and May for League 1, have offered some much needed hope to players, officials and supporters.

Many of those clubs will also be in action before Super League as well, with the first round of the newly-structured Challenge Cup being played the weekend before the top tier.

But underneath all of that was significant disappointment for some clubs in their exclusion from the Challenge Cup – and the issue isn’t straight forward.

In talks between the third-tier clubs and League 1, it became apparent that three clubs, out of a total of ten, were needed to effectively make up the numbers for round one.

Unfortunately seven indicated they wanted to take part, which meant the creation of a preliminary round (a notion fans of a certain age will remember from some time ago).

In that case, a more accommodating six clubs could then be reduced to three, who then join the Championship clubs competing in round one.

The catch was that there would be no prize money for clubs getting knocked out at the preliminary stage.

With fans almost certain not to be present at those games and players having to return for training for what could be one match before a two-month break to the league kick-off, it made for difficult decisions.

According to the RFL’s statement, four clubs then “withdrew”, which also, as an aside, prevents them from trying to reach the semi-finals of the AB Sundecks Cup (those places go to the four clubs that make it to the third round of the Challenge Cup).

And while that left the governing body with a rather neat three teams – Barrow, Keighley and West Wales – the version of events from one of the four, Rochdale Hornets, is noticeably different.

They quickly issued a statement which reads: “Rochdale Hornets can confirm that we were not selected to take part in the Challenge Cup for 2021.

“In a meeting with the Championship and League 1 clubs last week, the RFL Executive recommended that no League 1 clubs should take part in the Challenge Cup due to a number of circumstances created by the pandemic.

“The delayed season start meant that Challenge Cup fixtures would need to be played earlier than the proposed May 2021 restart for League 1.

“However, the RFL Executive also invited League 1 to express an interest in entering the Challenge Cup as there were three spaces available in the formatting of the competition. Rochdale Hornets entered alongside six other clubs.

“Following the meeting, the RFL wrote to clubs informing us that seven League 1 clubs had entered, which was too many and asked us to reconsider.

“The RFL proposed a preliminary round which could only accommodate six clubs and not the seven that entered.

“In addition, the proposal outlined that the preliminary round would be unfunded and clubs would not receive an appearance fee or any prize money if they exited the competition.

“We were given 24 hours to consider this proposal and based on this new information, Rochdale Hornets confirmed our entry on the basis that there was no preliminary.

“We were informed late last night that we had not been selected as one of the three clubs to play in the Challenge Cup.

“We are deeply disappointed at not being selected to play in the prestigious Challenge Cup competition.

“Rochdale Hornets will write to the RFL Executive seeking clarity on the Challenge Cup situation alongside other competition related matters.”

When contacted by League Express, Hornets Chairman Andy Mazey admitted his board of directors were “angry” with the sequence of events.

He added: “At a time when clubs are trying to survive and adhere to stringent testing, the governing body seems to think it’s appropriate to pull funding in the sport’s key competition.

“The BBC would be proud I’m sure.

“There’s been a complete disregard to the clubs and the players they are supposed to represent.”

Mazey gained support from his Hunslet counterpart Ken Sykes the following day, who with his club in the same position, said: “We are disappointed with the way things have been handled; lessons need to be learned by the RFL.”

It has been almost 12 months of difficult scenarios and imperfect solutions and this is one of them.

The governing body clearly had an issue that needed resolving, and as always, each club has its own unique set of circumstances.

But for some, such as Rochdale, the resolution has been desperately disappointing, extending their long-held wait to return to the field.