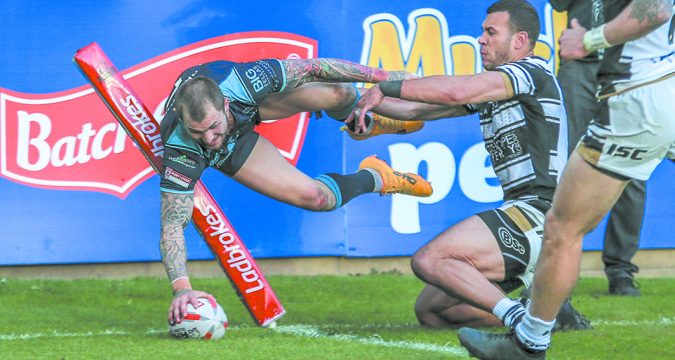 Luke Briscoe would have surely been forgiven for getting slightly confused when his former and current employers ran his contractual situation by him earlier this week.

The Featherstone winger has signed for Leeds for a third time – only this time on loan until the end of the season. Yet as early as this weekend, he could make his way back to the Championship side on dual-registration and, no matter what, he has another year left under contract at Featherstone in 2019. That means that Featherstone will be dual-registering a player who, effectively, is still theirs after he plays for the Rhinos on Wednesday night.

Confused? You should be.

It’s the latest bizarre instalment in an aspect of the game which perhaps epitomises the ongoing row over the league structure best. Some people like dual-registration. Some people loathe it. But does it have a part to play in any revamped format of British rugby league from next season onwards?

With all the debate about which format, which version of promotion and relegation and what level of funding distribution is best for everyone from 2019 onwards, is dual-registration actually worth keeping, or does it simply uneven the playing field too much?

I’d say there’s a fair case for its time coming to an end sooner, rather than later.

Let’s not pretend that Leeds’ dual-registration – and further – links with Featherstone have not helped in getting this deal, which could effectively be a one-time thing, for Briscoe over the line. At least one other Super League club asked about taking Briscoe on loan at one stage this year and were told no.

You can’t dual-register players ‘up’; that is, a Super League club can’t take a Championship player for a one-off game like a Championship side such as Featherstone has been able to do with the likes of Brad Dwyer this season. So Leeds have utilised both the loan market and their dual-registration links to their advantage, bringing Briscoe in for Wednesday night before dual-registering him back to the club with whom his contract remains in place with.

It’s a murky, murky state of affairs – and adds weight to the argument for those who believe dual-registration simply creates an uneven playing field.

As a firm believer in the mandatory return of reserve grade for Super League sides (and eventually, rolled out into Championship), dual-registration gives clubs an easy opt-out from having a reserve team. Rather than fulfil reserve fixtures which could actually have tangible, significant long-term benefits for their club, the easy way around getting a player some game-time is throwing him into the nearest Championship or League 1 game with a partner club.

Here’s a quote from Adam Swift recently on what he’d rather be doing when out of the side at St Helens (clue, it isn’t playing on dual-registration): “I could have been playing reserves the last few weeks and that would have stood me in better stead for playing with someone dropping out.” That’s another thing with dual-registration; it doesn’t offer regular, guaranteed game-time like a properly structured reserve competition would.

And you do wonder sometimes how players playing dropped in at short notice – sometimes without any training with a dual-reg club in the run-up to a game – actually benefits Championship and League 1 clubs who could instead be playing their own players. I noted a comment from a Featherstone fan on Twitter when the Briscoe deal was announced, saying he’d much rather see his own team’s players – citing try-scoring forward Luke Cooper as an example – get opportunities rather than players who can’t get in Leeds’ first-team. It’s a perfectly valid point.

It’s important to point out that there are some benefits to dual-regsistraition, and some clubs have relationships – like Doncaster and Hull FC – which go way beyond borrowing players one week at a time. That’s heartening to see, and it’s great that Super League clubs are helping lower-league sides out off the field, as well as on it.

But realistically, when the serious discussions start over the league structure, wouldn’t the game be better served pushing through a proper reserve grade and consigning dual-registration to the past? The last few days prove that, if anything, it makes a mockery of the sport at times.