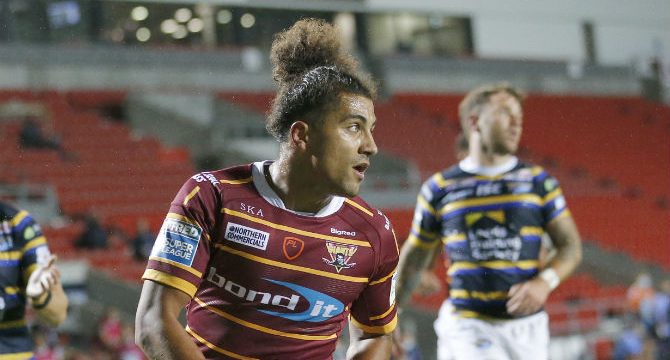 Huddersfield Giants have suffered a major injury blow, with Ashton Golding being ruled out for several months after dislocating his shoulder in training.

The fullback suffered the injury during a routine training drill and is expected to miss between three to four months of action, with an operation set to take place soon.

With the new season now set to start in nine weeks’ time, it appears inevitable that Golding will miss the opening weeks.

Golding is Huddersfield’s only specialist fullback, though Darnell McIntosh and Lee Gaskell have both previously played in that position.

Despite that, Giants coach Ian Watson insists that his side will be able to cope during Golding’s absence.

“It’s a blow obviously, as he was our number one fullback,” Watson told League Express.

“He’s just had a bit of bad luck. He was bringing the ball out and got caught in an awkward position. It happens, rugby is rugby; you’d rather pick up one now so he’s more or less good for the rest of the season.

“But with the quality and squad depth we’ve got now with Jack Cogger and Ricky Leutele coming in, we’ve got people like Gaskell, McIntosh, so we’ve got some we can move around. It’s a blow that we’ve lost him, but it’s a squad game; you don’t win anything with individuals.”

The temptation to recruit is always a consideration for coaches, though Watson stated that wouldn’t be the case, with one of the club’s rising talents more likely to be given an opportunity.

“You’re always on the lookout to see who’s available and who could come in to compete and keep that competition for places, but we’re comfortable where we are. We’ve also got young Aidan McGowan, who is doing outstandingly well and we’re really pleased with how he’s looking.

“The big one for Ash is to keep positive and to do what he can to get back in. He seems a great kid from the time I’ve known him and I’ve no doubt that he’ll come back stronger.”

Meanwhile, the Giants revealed their squad numbers for the 2021 season last week.

Fellow new recruit Josh Jones has been handed the number 13 shirt, while Joe Greenwood, who has joined from Wigan, will wear number 15.

Michael Lawrence has vacated the 13 jersey and will now wear number 10, while NRL recruit Jack Cogger will wear 16.