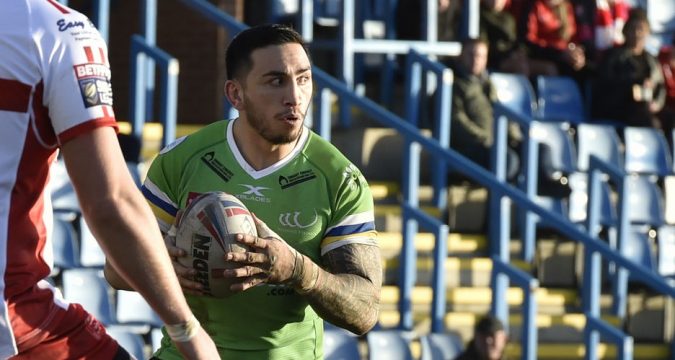 Harrison Hansen will continue his French connection after agreeing a new contract to stay with Toulouse Olympique for the 2021 season.
The 34-year-old former Wigan, Salford, Leigh and Widnes forward joined the Championship’s French side this year, but is so happy he has agreed an immediate extension to his current one-season deal.
“It was a very easy decision for me and I’m glad the club felt the same,” Hansen told League Express.
The two-time Grand Final and Challenge Cup-winner has brought a wealth of experience to Sylvain Houles’ promotion-chasing side and Hansen believes the club has got what it takes to make the leap into Super League.
“I’m really enjoying life over here so far and I’d love to help the club achieve their full potential,” he said, adding.
“It’s a really positive group and the club is on the up with everyone working hard to make it as professional as it can be.
“Sylvain is a great coach who has the respect of everyone here. He lets us express ourselves, which shows in the style of our play. We have a really good mix in the team of experience, talent and flair which makes it exciting to watch.”
Hansen is a well-travelled seasoned professional but the switch to France was an unexpected challenge at this stage of his career.
He said: “It was a bit of slow start for me back in November when I first joined the squad. It took some time for me to find my bearings and get used to simple things like driving on the opposite side of the road, that was hard to adjust to. I had a few near misses but those French curbs soon got me straight.
“The language is a tough barrier but I’m having lessons along with the English boys and starting to grasp certain phrases. The culture is very different to previous clubs I’ve played for. Every morning here we acknowledge everyone with good morning and a handshake, something I was not used to.
“On a side note, Cédric Garcia our CEO, has been a massive help for me to adjust to life over here. I’m really loving the whole experience even during this lockdown because of the virus.
“I decided to stay in France and it’s not been that bad being in lockdown to be honest. Of course it’s frustrating not being to train and play with the boys, but everyone’s in the same boat so you’ve just got to roll with it. I have weights in my garage which are keeping me in shape.”
Hansen understands his role at the club is to bring top-flight experience and game management to Houles’ free-flowing French side.
The New Zealand and Samoan international said: “I’m keeping the same approach as I have done throughout my career, and that’s just to train and play the best that I can each week to help the team. As a team our goal is to get promoted, plain and simple. As long as we stay consistent and work hard after this lockdown, there’s no reason why we can’t reach that goal.”
Hansen feels Toulouse can see the finish line even though the season has hardly started properly, although he is keeping a wary eye on one of his former clubs. He said: “Since Toronto were promoted it’s definitely made the championship a more even playing field.
“There’s probably four or five teams fighting for that top spot now but in my opinion I think Leigh are our biggest rival and threat. They’ve recruited some seasoned battle-hardened professionals who’ve been consistent in both Super League and the championship for a while.
“It will be one hell of a battle when we meet.”