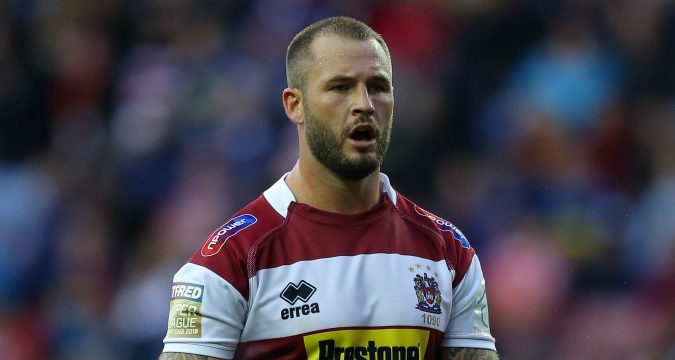 Zak Hardaker has admitted to suffering from bouts of depression as a result of the lockdown.

Giving an honest insight into his life in isolation, the Wigan star admits to feeling alone and struggling to get out of bed as the realisation of the full extent of the pandemic began to sink in.

The 28-year-old, whose issues in the past have been well documented, has found it difficult to cope without the release that rugby provides while being unable to see his family, who still live in Pontefract while he is based in Wigan.

“If I’m totally honest I’ve been struggling,” he said.

“Everyone knows my little problems like ADHD; my main thing with training is being around the boys, which lets me loosen my energy up so that I’m competing every day and always doing something.

“But that’s all stripped back and I’ve found it really difficult to motivate myself. I’ve been getting up at 12 and thinking I can’t be bothered.

“The first two weeks were a bit like the off-season because I knew it was going to be a long time until we could play again, so I felt like there was no point training yet. I was enjoying a few beers and a barbecue in the sun and I was getting into that rhythm of not doing anything.

“I was doing TikToks, the party apps. It felt good, but then it kind of dropped off. The TikToks dropped off because I couldn’t be arsed.

“I know some of the lads are in a routine and that’s what I’ve struggled with. My girlfriend is a key worker, so she’s working four days a week and working 12-hour shifts, so I’ve two or three days on my own and there’s only so much Call Of Duty you can play!

“I was having conversations with my partner, who was asking why I felt like I did, and I was explaining that while she is interacting at work, I’m stuck in Wigan on my own without my family. I’ve seen people say their kids are driving them up the wall, but I’d love a kid to be with me so I had someone to play with.

“I understand what’s going on in the world, but being genuinely honest I’ve had ups and downs and I’ve been a bit depressed. I know I was depressed because I’ve been in that place before and you know what it feels like, and I could feel it again.”

Thankfully, with the help of people at the Warriors, Hardaker has found his way out of the rut and has found ways to cope with the challenges posed by these uncertain times.

“I’ve spoken to people, which is a massive help,” he added.

“I’ve kind of cheated myself, because I’ve told people to speak about things, but I didn’t do it myself.

“When I did, I felt a lot better. Today I got up at half 6 in the morning and I went for a three and a half-mile run and felt great. I’ve chilled out on Call Of Duty, but I feel like I’ve ticked a box.

“I built a barbecue one day, I bought some wood for the burner, I felt like I’d achieved something on that day even though I’d not done anything special. It gets my mind away from being stuck in the house.

“Kris Radlinski rings every day and he even nipped by the house one day while social distancing obviously. I’ve got a bag of balls to practise my kicking, which is keeping the mind busy and working. I was practising at Wigan Rugby Union, but the man who runs it told me off!

So I’ve been using another local field just by Wigan, which is not too bad, I’ve got a cone and a few balls; Jackson (Hastings), Chris Hankinson and I have been doing interval training, all rotating around each other, so it’s not been too bad. I’ve ordered a kicking cone from New Zealand; I thought that would be something nice to look forward to.

“I did speak to our welfare manager at Wigan, Tom Fitzpatrick. Because we’ve been given a government grant I think there’s some light at the end of the tunnel. I’m not sure how long the tunnel is, but we seem to have gotten past the really strict bit, which has helped.

“I’ve been through ten days of being really good. Being brutally honest, I’ve had ups and downs, but to be fair I’m feeling pretty good now.”