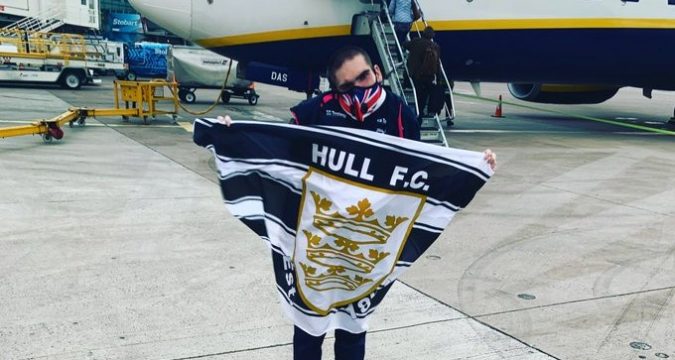 It was set to be a trip away to see his beloved club in action for the first time in months.

But poor Hull FC fan Lewis Bell is now back in the UK and self-isolating for 14 days without seeing his team play after Hull FC’s clash with Catalans was cancelled.

The passionate Black and Whites fan headed out to Perpignan to get a glimpse of his side in action, with 5,000 allowed into games in France.

With the chance to see his team live for the first time post-lockdown, Lewis and his mum wasted no time getting a trip booked.

But seven positive Covid-19 cases within the Catalans camp saw the game cancelled, and Lewis searching for an early trip home.

“I’m disappointed but there was always a chance that something like this could happen,” he said.

“The fixtures change on a weekly basis sometimes so part of me knew the risks when I decided to go there.

“I’ve not seen the lads play since Radders got the sack so I was looking forward to it but at the same time I knew that anything could happen for the game to get called off.”

Lewis has now returned to the UK after re-arranging his flights.

“When I booked everything I made sure we had free cancellation on everything. Despite us paying for four nights in Perpignan, the hotel was nice enough to let us pay half since we only stayed for two and one of the Ryanair flights we got changed free of charge.

“It was just the Barcelona to Ibiza where we had to fork out but that was a cheap 30-minute flight.

“I had to fly to Ibiza because there were no direct flights to England at all today from either Perpignan, Girona or Barcelona. The only way we could do it was to get a cheap flight early hours in the morning to Ibiza to catch the Ibiza to Manchester flight.”

As a result of current travel restrictions, he’ll have to self-isolate for the next fortnight, a price that would have been worth paying to see his team play.

Nevertheless, Lewis does not regret making the trip.

“No one can predict the future, I knew from the get-go that there was always a chance and any little thing can stop the game going ahead.

“So no I don’t regret doing it. If both teams announced a new fixture there in a month or so, I’ll be back.”