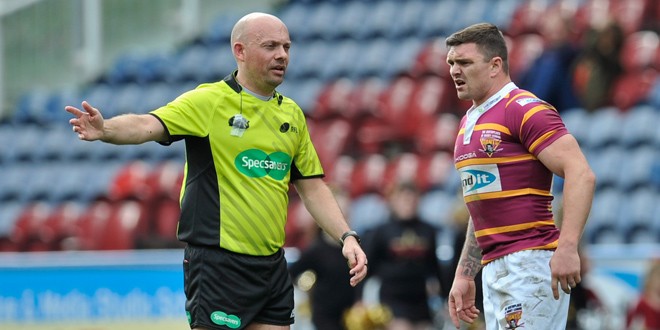 Welcome to a brand new feature on TotalRL.com – Hot Topic. We’re throwing open the discussion on rugby league’s biggest and hottest talking points, and want your opinions as to how the game can be improved.

With the help of our Twitter followers, we’re looking for your responses to the big issues surrounding the game this week – with the first issue a huge talking point.

Fresh off the back of St Helens’ controversial Tetley’s Challenge Cup win over Huddersfield Giants last Sunday, we want to know: How can the game avoid future dramas like the one surrounding Danny Brough’s “field-goal” last Sunday?

We’ve had plenty of response from our army of Twitter followers, and here are some of the best suggestions as to how rugby league can avoid another one-point drama like the one seen in the cup last weekend.

Your Responses
Chrisdm77 says: We can’t avoid it. I can’t remember the last time a drop goal decision wasn’t clear. No need for any laser beams or netting. It causes debate and talking points which we need!

Dave Gould says: Refs need to use the facilities given to them ie the video ref. surely they know they can use it for a drop goal as well.

Mark Stevo says: It should be standard that all games have an in goal TJ & he gets final say on it when it isnt clear through the middle.

Wobbly Headed Bull says: Why would we want to do that? It was brilliant.

Mark Ryan says: Don’t have referees on the pitch, the camera covers everything. Just linesmen and someone watching on the big screen.

Dave Cooper says: How about respecting the ref’s decision, right or wrong, moaning won’t change it, never has and never will.