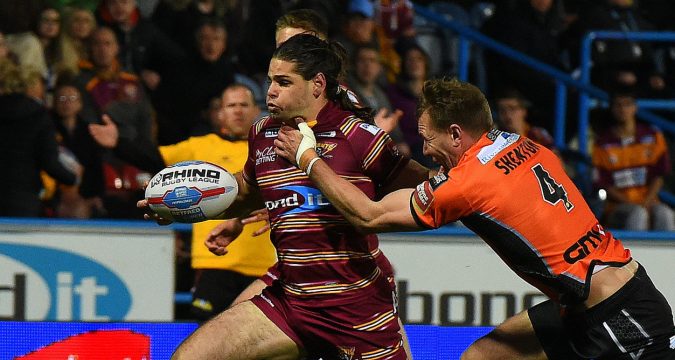 The 23-year-old had been an impressive addition to Rick Stone’s side since battling back from a separate injury, scoring 12 tries in nine Super League games.

However, a foot injury picked up last month is now worse than first feared, with Stone confirming the fullback will not play again in 2017.

He said: “It’s going to keep him out for the rest of the year which is disappointing, because he’s been a big part of our mid-season revival here at the Giants once he’s got playing.

“It’s a lisfranc injury, which is a ligament that binds two of the major bones in your foot. When it ruptures you don’t have the same support as normal, so it’s an injury that keeps you motionless for a while. It’s going to take a long period of recovery to get him back.

“It’s the opposite foot from the one he had the screw in, but this effectively rules him out of the rest of the year and our goal now is to get him ready for next year.”

Stone, however, calmed any fears that the injury could have long-term ramifications for Mamo. He said: “It’s an injury players come back from, there’s no concern, but it takes time.”

Stone also admitted that the injury to Mamo leaves the door open for an extended run at fullback for new recruit Jordan Rankin.

He said: “We were always looking to add some depth and when we got the opportunity sign Jordan, we weren’t sure where he would play. But since Jordan Turner and Jake Mamo have been injured it opens up a couple of spots for him. He’s likely to have another go at fullback this week.

“Jake has been vital on and off the field; what he provided in terms of energy was great and what he provided on it was sensational as well. He’s been a welcome addition to our club and hopefully the competition too, because people like to see those guys who can put bums on seats and sell some tickets.”

Stone is also sweating on the fitness of winger Aaron Murphy and forward Dale Ferguson for Friday’s clash against Widnes. Murphy has a toe injury and is a severe doubt – but there are potential returns for half-back Martyn Ridyard and England international Jermaine McGillvary.