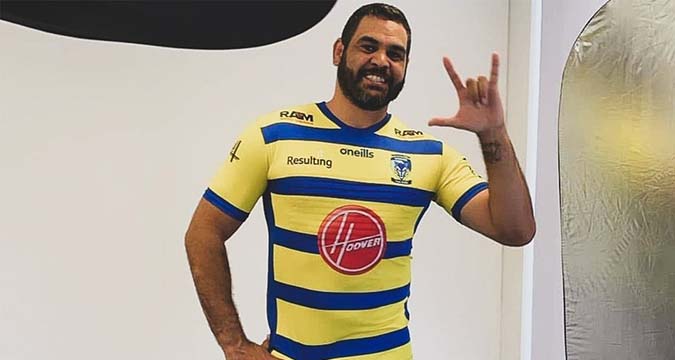 Warrington’s head of performance Ade Gardner has labelled Greg Inglis a freak after the Australian star has made an impressive start to pre-season training.

Inglis has linked up with the Wolves to continue his Rugby League career, nearly two years since announcing his retirement.

But Gardner, who will be part of England’s strength and conditioning team for the World Cup, has been delighted with Inglis’ condition after his arrival.

“You don’t realise how big he is. I had the honour, if you want to call it that, of playing against him in full flight. He’s two years out of the game, so clearly, he’s not in prime condition, but the best thing about him is that whatever we throw at him he takes it on board.

“We’re getting there with his running progressions and he’s getting more involved in the sessions all the time. A big positive for him is that we now have two extra weeks to refine a few things with him before the season starts.

“Greg is kind of starting from scratch, he’s been doing some work on his own ahead of arriving but not at the intensity of a pro-Rugby League club. But he’s an unbelievable athlete who adapts very quickly and we’re already seeing that.

“We’ve taken some baby steps with his running progressions and he’s had the transition of adapting to the weather and the time difference, but we’ve come to the end of that and he’s taking everything on board really well.”

Gardner’s rise as a strength and conditioner has been somewhat meteoric. The Cumbrian ended his playing career just over six years ago but will now be part of the England setup for the World Cup later this year after earning plaudits for his work at Warrington.

“I retired and got straight into strength and conditioning and had an unbelievable grounding working with Saints’ Academy before taking on the role. I came to Warrington two years ago and now I’ll be working with England.

“It’s not an easy job, a lot goes into it, but at the same time, it’s not like a job because it’s so enjoyable.

“Shaun Wane is trying to find backroom staff and Chris Barran, who I work with at Warrington, is the lead and asked if I was keen on doing it.

“The word he keeps using is ‘obsessed’ with regards to winning the World Cup; it rubs off on you and he wants everyone to be so meticulous in what they do. It’s a massive honour.

“It will be a bit different coming off the back of a long season to then perform against the elite. Recovery protocols will be very important; it’s not as in-depth as pre-season, which is a lot of strength and speed, whereas during a tournament it’s about managing them during the week while making sure they’re training at international levels to reach international standards.”