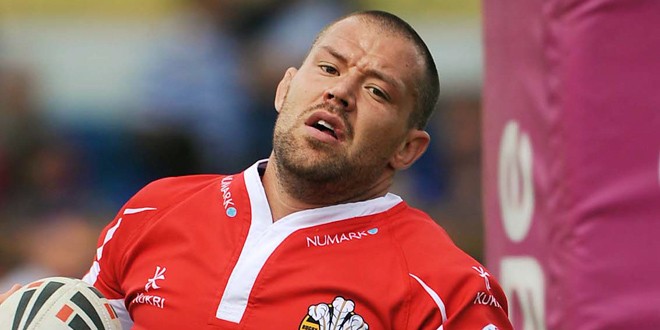 Wigan’s latest signing on ‘Take Me Out’ fame, five years in the Royal Marines, and partying with Hollywood celebrities…

What would your last meal on Earth be?
It would probably be an Indian. Chicken Tikka Massala with a garlic keema naan, pilau rice and some onion bhajis. I would probably have a can of fizzy Vimto with it.

What song do you listen to more than any other?
I quite like that new Breach one, ‘Everything You Never Had’, that’s the one getting the most plays at the moment.

Which superpower would you most like to have?
X-Ray vision. You work out what I’d do with it!

If you could become any animal, what would you be?
I’d definitely be a silverback gorilla. I’d get all my female gorillas around me and just keep them there and have my wicked way with them as much as I could.

What year would you go to in a time machine?
I would go to 1980 when I was born, see what it was like. You look at old photos and you wonder what it was like. If I went 20 years in the future I’d probably be in a wheelchair somewhere, with 10 dogs. Drinking through a straw with no teeth.

It’s my round, what are you drinking?
Either cider or JD and coke. I like any cider, Rekorderlig, Bulmers, I like the flavoured ones. I will start with a Strongbow then work my way up from there. You can’t go from back from a flavoured one to a Strongbow.

Do you have any lucky charms or superstitions?
No, apart from liking to get strapped as early as possible so I can get in and do my preparations before the game. Just so I’m organised, I don’t like to be rushing.

What is your favourite TV programme?
Only Fools and Horses. Massively gutted about Trigger [character portrayed by Roger Lloyd-Pack, who sadly passed away on January 15]. I have the box set at home and I watch it all the time. I love it. I’ve heard they’re doing one for Sport Relief so that will be good. Looking forward to that.

What is your favourite film?
I like Snatch and Rock and Rolla. Guy Ritchie films, any sort of British gangster films I’m quite into. I love Denzel Washington, too, like Man on Fire. I don’t mind comedies, I like Will Ferrell.

Dogs or cats?
Dogs, definitely. I’ve got a little Staffy [Staffordshire Bull Terrier], named Pumbaa after the Lion King character. He’s a rescue dog and I’ve had him about five years now. He’s cool, he just sleeps all day fusses a little bit, eats, take him for walks and that’s it. He’s the best dog I could ask for. He once ran that hard into a glass window he cracked it. Like a conservatory door. He was running to go outside and didn’t see it was glass, and cracked all the glass. He’s very thick.

Tidy or messy?
Tidy. Not OCD tidy but I like to think I’m quite tidy, I live on my own so I’ve got to be.

Any bad habits?
I sometimes pick my nose while I’m driving, but that’s about it really. I’ve been caught a few times. My ex-girlfriend, it was our first date I think and I just threw it on the floor. She was like “have you just picked your nose and thrown it on the floor?”

What was your first car?
It was a Peugeot 106, a green one, Roland Garros model. I loved it. It was L reg. That’s how long ago it was. I’ve got a Nissan Qashqai now. It’s great for the dog. I can take him places in it. I’m not really into small cars, I’m a big lump.

Do you have any hobbies?
I used to DJ a little, but I don’t do that too much now. Other than that just walking the dog, going for meals with my mates or my girlfriend, having a beer. I like to keep fit, too, I like doing extra weights. I tried golf for a while but it just wound me up, I ended up throwing the clubs farther than I hit the ball!

Who is your favourite fictional character?
I always wanted to be He-Man when I was younger, so I’ll probably say him. He was one of my favourites. He had long blonde hair, he used to ride a big tiger and he had a big sword, so he was really cool.

Do you have any party tricks?
I can just about do the splits. Front ways, not sideways. I’ve always been quite flexible, so I’ve done it from a young age.

What did you do for your first job?
I was in the marines for five and a half years. It was hard. I joined when I was 17; my dad was in the marines so it was a natural progression for me. I loved it, got to go away, did a tour of Iraq, Northern Ireland, Sierra Leone. But I got the opportunity to play rugby so I left. Once we were on a trip out in Turkey and our ship was just offshore, probably about a mile and a half. We had to get a ferry across. We were given the night off, so we all got the ferry across to go out and the last ferry was going back at two in the morning. Of course, boot necks being boot necks, they’re never going to make it. So we got out of the club at like four or five in the morning and we thought how are we going to get back to the ship. So we all decided to swim. We started swimming and obviously a big ship looks a lot

closer than it actually is, we got about half way and the lads were starting to struggle. I was starting to struggle, then we heard this noise, and it was a pedalo, which one of the lads had nicked. We all clambered on, got to the ship, quickly ran in, no-one was on duty, got in our beds, all soaking wet, and then in the morning we all got told to muster on the flight deck. The sergeant major said everyone go to the side of the deck and look over, so we did and there were lilos, pedelos, and a speedboat  – someone had nicked a speedboat! – and obviously after that we weren’t allowed out. It was a good laugh though.

What is the greatest moment of your life?
I suppose winning the European Nations with Wales was up there, playing in the Four Nations with Wales. And then obviously what I’m doing now, to be given the opportunity to play for Wigan again, right at the end of my career, it’s a fairytale really.

Who is your best friend in the game?
Joe Hirst, who’s playing at Sheffield Eagles, is my best mate. And then I’m really good friends with Chris Morley, Adrian’s brother, I live round the corner from him in Manchester. And then Michael Platt who’s playing at Crusaders now, he was at Bradford. Those three are the mates who I see the most.

Who is the funniest Rugby League player you know?
Probably Chris Morley. He’s absolutely mental, he doesn’t care about anything. He’s an absolute diamond of a bloke, he’s hilarious.

Do you have any guilty pleasures?
Crisps, I’ve got savoury mouth instead of a sweet tooth. I love McCoys flame-grilled steak. Man crisps! They’re nice and strong.

What is your most embarrassing moment?
Probably when I was on ‘Take Me Out’ [ITV dating show in which single men are paraded alone in front of 30 females in a circle who show their approval by keeping a light switched on]. It was an eye-opener. I did it for a laugh. I knew a girl who was on it and she said they were asking for blokes to go on it and I wasn’t really interested. But she put my name forward, they rang me up and asked me to do it.

I wasn’t going to, but the Salford lads

persuaded me to do it. I did alright and got a date. In fact I was the only man to have 30 lights left on. I came out of it alright but it was quite cheesy and embarrassing. I’m probably better known for ‘Take Me Out’ than for my rugby.

Have you ever been star struck? If so, who by?
I once met Kiefer Sutherland [of ’24’ fame] and Charlie Sheen [‘Two and a Half Men’] who were filming down in Cornwall. My dad ran a pub down there at the time and they both actually stayed after hours with my dad. We got absolutely legless with them – I was only about 13 – and they invited us to the end-of-film party, it was fantastic.