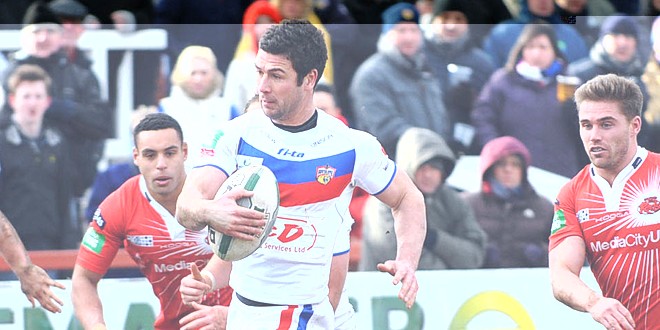 Wakefield full-back Richard Mathers believes now is as good an opportunity as ever to play St Helens, as they bid to become the first team to defeat the Saints in 2014.

Nathan Brown’s table-toppers will be without a whole host of players for the trip to West Yorkshire, including star half-back Luke Walsh, who is out injured. That left Mathers admitting whilst it is an ideal time to play the Saints, it will still be an incredibly tough test.

“We’ve had a couple of decent wins but this will be a great test. They play expansive rugby and it’ll be a big job for our pack this weekend. Everyone is vying for a spot though, and Richard (Agar) has got some really good depth, which is a position we haven’t been blessed with in the past,” Mathers said.

“I’m not going to lie; if you take out the calibre of players they will have missing this weekend it would affect any side. It probably is an ideal time to play them, but they’re a club that have been as established as they have been for a long time because they rely on a squad of players.

“It’s probably a good opportunity to get them on Sunday whilst they’ve got their main half-back out of action, as well as a couple of big forwards. It helps that they’ve got bodies out, but it will still be an incredibly tough test.”

Mathers is coming into the game fresh off the back of a four-try haul against London last weekend, but he was quick to pay tribute to the rest of his side, as they posted over 50 points for the second straight game.

“Yeah it was nice to get four tries; it was the second week running we’ve scored over 50 points and it shows how well we can attack.

“The four guys in the outside backs in particular stand out, but that all comes from the work of the pack. With Ali on one side, Kirmond and Collis on the right – we just back up and support what they do well.”