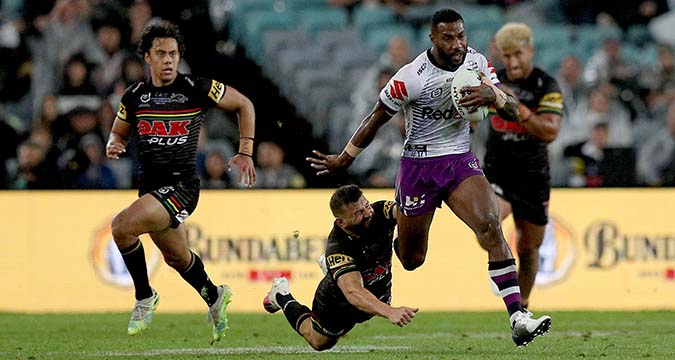 Melbourne Storm held off a strong Penrith Panthers comeback to seal the 2020 NRL Premiership with a 26-20 victory at ANZ Stadium.

The Storm had a 22-0 lead at the break and scored the first try of the second half but Penrith were able to make a game of it with four tries but in the end their amazing comeback gave them a chance until the final seconds but it was too little too late.

Things didn’t go right for Penrith almost from the beginning and they were behind to Justin Olam’s penalty try after only four minutes.

The Storm extended their lead, amid pressure from Penrith, with two penalties midway through the half to make their lead ten points.

And two further tries blew out the score before the break. Suliasi Vunivalu intercepted Nathan Cleary’s pass before Cameron Smith regather a loose ball, knocked down by Apisai Koroisau to score just before the hooter.

It looked like the game was over when Ryan Papenhuyzen steamed away for a sensational try after only six minutes of the second half but the Panthers were able to mount a comeback with Brian To’o, Stephen Crichton, Josh Mansour and Nathan Cleary all scoring but it wasn’t quite enough

A full two-page match report of the NRL Grand Final will feature in Monday’s League Express.