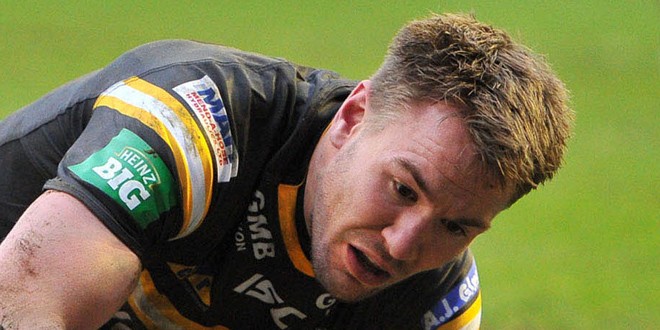 The Castleford captain on Coronas, curries, and Cancun…

What would your last meal on Earth be?
I’m a fillet steak man. I have it medium-rare with home-made chips, onion rings and peppercorn sauce. That’s my kind of meal. I’d probably wash it down with a Corona [a Mexican pale lager].

What song do you listen to more than any other?
At the minute I’m listening to the new Kings of Leon album. It’s pretty good.

Which superpower would you most like to have?
Probably fly. I’d go all over – wherever it’s warm. My two favourite holidays have been Las Vegas and Cancun in Mexico, if I could mix it up I’d probably go to Vegas for a few nights then finish off at Cancun.

If you could become any animal, what would you be?
A Tiger is too cheesy! Probably an eagle, something that can fly.

What year would you go to in a time machine?
I’d probably go 200 years in the future, see what’s happening. You can read about what’s happened in the past, can’t you?

What scares you more than anything?
I don’t have any phobias. I suppose as a player, long-term injuries, something like that is the scariest thing. Ending your career early.

It’s my round, what are you drinking?
I mix it up, mainly Coronas but a few Disaronno [amaretto-like almond liquer] and Cokes, they’re alright, like Dr Pepper. I haven’t been out for ages because me and the missus have just had a baby. I might get out once before the season starts.

Dogs or cats?
Probably dogs, Dobermans. I grew up with both. You just get more affection from them, cats just run away from you don’t they, they’re not bothered.

What is your favourite TV programme?
Probably Top Gear, I’m a massive Top Gear fan. I also like chilled out stuff like Two And A Half Men, things like that, easy watching. Then documentaries. I don’t mind watching them. I do like my cars but they’re a bit of a waste of money aren’t they? I’d like to have a nice car one day.

What is your all-time favourite film?
I’m a massive fan of Christopher Nolan films, the Dark Knight and Inception. I kind of got the gist of Inception first time, but it took me another couple of times to fully understand it. It makes you think about it, and I like that.

Do you have any lucky charms or superstitions?
I’m not really like that, not into that kind of stuff. I stick to a basic preparation as a professional, but nothing like putting one sock on before the other or changing my underpants three times before a game like some people do. It drives me mad watching that. When I was at Saints, Jonny Lomax was a nightmare. He has these cycling shorts, he has a white pair and black pair. He’ll come in like a white pair, gets to the ground put his black pair on to get strapped, change into his white pair for the warm-up, and go back into his black pair for the game. You watch people sometimes, they drive you mad.

Curry or a Chinese?
I’ll go curry. I always mix it up. I have a chicken tikka masala or a lamb hyderabadi. I just pick anything – I look at the menu. I normally go in a group and we usually get a few different dishes and share them out. I’m alright with spice, I don’t mind a bit of a kick. Nothing ridiculous. I like the pain sometimes, a little tingle. Normally have rice and naan breads.

Tidy or messy?
I’d say tidy but my missus will probably say messy. I won’t leave stuff lying about, I will put it where it needs to go. I’m not obsessive though.

Any bad habits?
It’s hard talking about yourself. Gaffer would probably say I’ve got some on the rugby field! I never clean my car, it’s always filthy. It’s not too bad inside, but outside is. I always think it’s a waste of time. You can probably write your name on the window and definitely on the boot where you lift it up. I have to clean the registration plate sometimes.

Do you have any hobbies?
A bit of golf now and then, I am not a member anywhere. My handicap would probably be between 15 and

18. I don’t get to play as much as I would like. I love watching sports on the telly, football and things like that. If I have time to myself I’ll sometimes have a hit on Call of Duty on the PS3.

Who is your favourite fictional character?
Jack Bauer, Keifer Sutherland. It’s from 24, and it’s class. There are 24 episodes in a series, an hour long each, they all go through a single day. I like him because he takes no crap off anybody, he’s got attitude. It’s an interesting character to watch.

What did you do for your first job?
At school I had a paper round and when I was at the Academy I used to work o

n the building site with my dad. He used to get me in the stores handing machinery out to welders and stuff like that. He had me working in my time off, in-between college and that. He didn’t let me sit at home all day and wait for training on a night.

What is the greatest moment of your life?
Having my children. In a career sense, making my England debut and playing in the Grand Final.

Who is your best friend in the game?
That’s quite tough. I’ve got a few, I don’t have one proper one because I have a lot of friends outside rugby, but I’m quite close with Kirk Dixon and Brett Ferres.

Who is the funniest player you know?
Ryan Boyle is probably the funniest. He’s just really dry, he just comes out with one-liners, the coach will say something and he’ll just come out with something that will make everyone laugh. He’s a bit slack but he’s got the fastest brain when it comes to a joke. He’s just great to have round the place to pick spirits up. He’s pretty good at bringing them down as well, to be honest, but he’s got the best one-liners in the game.

Which pro has the worst dress sense?
Jamie Ellis and Adam Milner – flip a coin between them. They’ll wear anything. They think some of the stuff they’ll get is really fashionable – multicoloured jumpers, terrible tight chinos, shocking trainers, they’re not bothered.

Have you ever been starstruck? If so, who by?
No, I’ve never been starstruck. I have been impressed by some people. You don’t really meet celebrities in our sport. I suppose playing with people like Jamie Peacock when I played for England – don’t put starstruck! – and Paul Wellens at Saints. They are the two best leaders I’ve played under. The way they talk, they won’t be influenced by the coach, they’ll get their point of view across. I’d like to think it’s helped me being under people like that. Don’t put starstruck, though!

If the world was about to end, what would you do?
I’d go see my family.

What would you do on the way, go looting?
I’d probably pick some beers up!