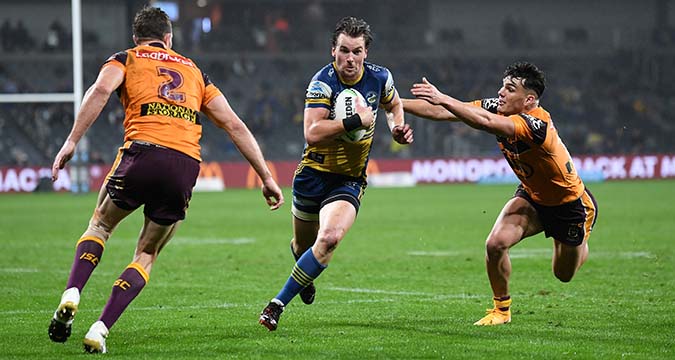 Jarome Luai is the key
Nathan Cleary is the wise head on the shoulders of the team and is dangerous with his kicking and running game but to have a player like Jarome Luai next to him makes his life a lot easier.
Luai was the star as Penrith sealed the third Minor Premiership in their history. He caused mayhem with his kicking, running and passing of the ball. His combination with Cleary is perfectly balanced and allows Cleary to concentrate on controlling the game with his long and short kicking.

Gutherson can haul the Eels through the Finals
Parramatta aren’t in the best of form heading in to the business end of the season but fullback Clint Gutherson is capable of hauling his team through it.
He scored twice as the Eels beat a hapless Brisbane side who are now bottom of the league with only one game remaining.
Parramatta will need to improve hugely if they are to make the Grand Final but at least Gutherson gives them a chance.

Whitehead’s got everything
He’s gone under the radar a tad since the arrival of John Bateman but Elliott Whitehead is still as good and as skilful as ever.
He was forced into the halves when George Williams was sent for an HIA. He stepped up and won the game for his side against a stubborn Warriors team.
It was an eventful game with Ricky Stuart showing his frustration by chucking a water bottle out of his coaching box when Jack Wighton was sin binned. But we’re used to his antics by now!

Saifiti twins leading the Knights
It’s all well and good having stars like Kalyn Ponga in your team but if he’s playing behind a dominated pack then he might as well sit in the stands. The Saifiti twins, Daniel and Jacob, along with David Klemmer laid the platform for Newcastle as they returned to form against the Dragons.
Both scored a try and caused mayhem up the middle against a St George team who rely far too much on the talents of Zac Lomax.

Aubusson’s special to the Roosters
You can see how much he means to his fellow squad members and the fans of the Roosters. Mitchell Aubusson marked his club-record 303rd appearance for Sydney with two tries as they easily defeated Cronulla Sharks.
He’s an ever-dependable part of that squad. Not necessarily a star name but can fit in almost anywhere in the team where needed and still has plenty of quality at his disposal.
He’s a crucial part of their squad even if other stars grab the headlines.

Craig Bellamy can smile
He wasn’t particularly happy when we saw it against Wests on Saturday. Cameron Smith had just beaten his record of tries for the Storm. Smith pointed up to the box as he and his teammates jeered at their coach who replied with a middle finger and a little grin.
It makes a change from seeing the master pacing up and down his box with anger written all over his face even though his side are winning!

Holbrook’s king
Four wins on the bounce for Gold Coast and they’re up to ninth in the table. That’s quite some achievement for a side that were so far off last year. It’s not even like it’s a vastly different squad. When he arrived, he was warned he’d be using mostly the same players but he’s got them playing with plenty of confidence.
And next year, when they have their stars arriving like David Fifita and Tino Faasuamaleaui, they’ll be even better and will have a chance of a Finals spot.

Bulldogs are sweating
No one wants the wooden spoon and the Bulldogs have been bottom for months until they finally moved off the bottom last week.
They deserve it too but unfortunately for them, they’re playing Penrith next week while the Broncos, who need only one win to bounce back in front, have a winnable game against the Cowboys. It could all be for nought for Canterbury.