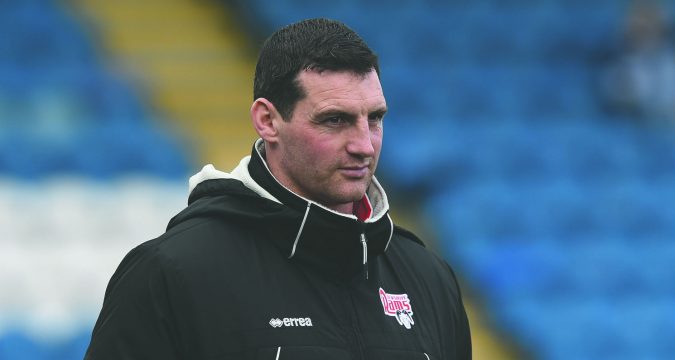 Even though the 2020 season was cut painfully short, one club had already established itself as the surprise package of the campaign.

Dewsbury Rams had enjoyed a wonderful start to the season, with eye-catching wins over Halifax and Widnes elevating them to fifth place before the season was suspended and subsequently declared null and void.

It was a start that coach Lee Greenwood had hoped would prove to be a continuation of the steady progression under his watch. Greenwood, a former England international winger, had overseen a 2019 campaign full of challenges, but he was ready to really stamp his identity on the team, and the club last year.

“I’ll be honest, when I came into the club it was a mess,” he says.

“We had a number of players contracted; a lot of the budget was taken up, but there were glaring holes in cover for players in certain positions. We had to go with a safety in numbers approach rather than getting the precise players we needed. We had a lot of players and some weren’t ready for Championship rugby, so then we had to bring loans in to get results week to week.

“But I always knew the long-term goal was to stay up and push on the year after. We did that and there was a big turnover of players. Sure enough, with their attitude through a difficult season, we thought those that stayed would thrive in a better culture. Maybe there had been a few at Dewsbury who had been there too long and were stuck in their ways, which I did get a big sense of. It was a ‘this is what we are and what we always will be’ sort of mentality.”

Greenwood will never know what his class of 2020 could have achieved. The pandemic has delayed his vision for the club by 12 months, but he’s confident the Rams can pick up where they left off when play resumes this year.

“It’s a shame that Covid kicked in, because if we’d continued on the upward curve we’d have finished higher, which means more distribution money and we could have strengthened that way.

“So the plan on the rugby side is that we’re going from twelfth again, that’s where we finished in 2019 and the goal is finishing higher than that and building gradually as we go along.

“We’re under no illusions about how tough it’s going to be; you’ve seen the signings many clubs have made from Super League and the quality they’ve brought in, but given the culture we’ve built we’re going in with confidence and there’s nothing to be scared of from our perspective.

“We look to get guys who do as much as they can away from training as well, so that they’re almost like full-time athletes. We have a lot of guys who work in the fitness industry and have the time to do it, and that means you’re not having to get 20 to 25 blokes up to be physically ready. You only need to go at a few of them.

“We’re a hard-working bunch. The way we train and do stuff means you get caught out if you’re not doing what you should be doing. I think the lads like that. They know that with tests in training, they just won’t figure if they don’t cut it, and it seemed to work well at the start of last year.

“We’ve lost a few players, Dom Speakman was a good player for us but we feel like we’ve replaced him with someone younger and with more potential in Reiss Butterworth, while Keenan Tomlinson is a good replacement for Sonny Esslemont. Jason Walton benefited from the time off.

“I feel we’re at least as strong if not stronger than we were, and we’ve left money to one side so that we can be smart during the season with loans or players who become available.”

Greenwood’s ambitions for the club on the pitch are matched by those off it. A hands-on coach, his aspiration is to make the whole setup stronger.

“I want it to be a good club, not just a good team,” he insists.

“We’ve set up a kids’ club and we’ll be carrying on with that when we can; we have fan forums that are well attended and we’ve tried to involve local amateur clubs; we had their open-age teams come down and do opposed sessions and we’ve had coaching seminars.

“We want the club to be central to rugby in Dewsbury. I didn’t know too much about it before I came here.

“I’d never played for Dewsbury, but on the doorstep, there are four clubs with good junior sections. It’s got it all there ready to go, but it’s probably been a victim of Super League swallowing everything up. I know as a Halifax lad that it was the same there; we lost one or two generations of supporters going to Super League clubs. So it’s a challenge, but we want to change it.”