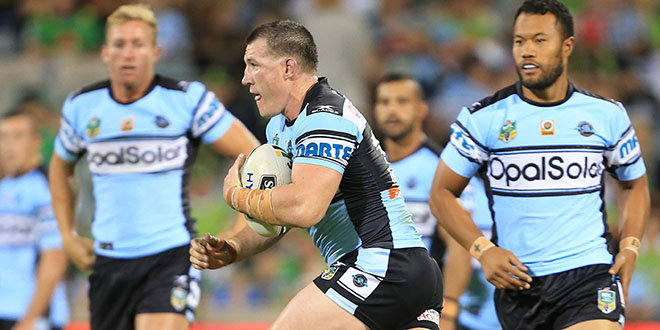 Cronulla Sharks blitzed Sydney Roosters 44-12 in a home game transferred by the Roosters to the Central Coast Stadium that drew a crowd of 20,060 spectators in Gosford.

Kane Evans was given the final spot on the bench for the Roosters with Nat Butcher dropping out.

Fa’amanu Brown replaced the injured Jayden Brailey (jaw) at hooker for Cronulla with Matt Prior returning to the starting side at prop and Jayson Bukuya dropping back to the bench. Joseph Paulo replaced the Leigh bound Daniel Mortimer on the interchange. Kurt Capewell also dropped out with Sam Tagataese getting a bench spot.

The Sharks opened the scoring with a James Maloney penalty and then Jack Bird ran through the defence to give the Sharks an 8-0 lead after 16 minutes.

The Roosters responded when Luke Keary’s pinpoint grubber found Daniel Tupou who touched down to reduce the margin.

Valentine Holmes and Ryan Matterson then swapped tries before winger Sosaia Feki touched down just before the break.

The second half was all Cronulla. Ricky Leutele was the first to touch down to push the lead out to 14 points and then winger Gerard Beale touched down before Luke Lewis intercepted near his own line and raced 90 metres to score before Leutele touched down again in the final play of the game.