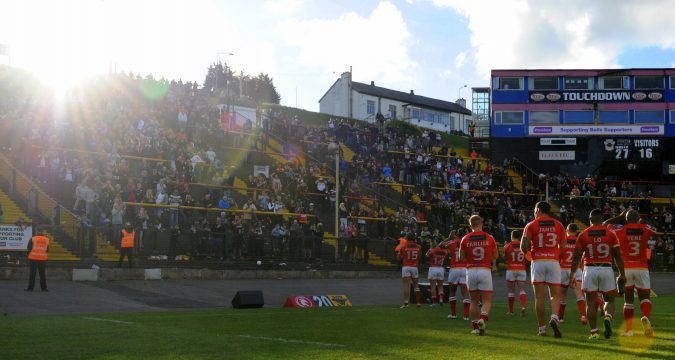 Sheffield Eagles will be in the Kingstone Press Championship next year.

The future of the South Yorkshire club has been in doubt due to financial logistics, however recent developments have put the club on a strong enough footing to participate in the second tear next year.

In even more positive news, the Eagles have confirmed a new proposed sponsor has reiterated his commitment to building a new stadium, which will allow the Eagles to return to Sheffield for the 2018 season, having been forced to play their home games at Wakefield’s Belle Vue ground this year.

Acting CEO and Head Coach Mark Aston said, “We have had a very, very tough time over the past few months but let there be no doubt, Sheffield Eagles will be here for the 2017 season and the signs remain positive for our long-term future.”

“We have worked around the clock to ensure the club remains alive and will be able to compete this year and we now have the environment to bring stability back to the Eagles.

“The RFL have said they are happy with our situation coming into the new season, and we can say that we are working tirelessly to be competitive on and off the field and rebuild this great club. The appointment of Chris Noble MBE as Chairman has helped bring a firm steadiness to the club, and he will play a big part in spearheading our short and long term plans.

“He has taken over from an excellent Chairman in Ian Swire who held the post for 17 years, since we reformed in 1999 and for those 17 years, we didn’t find ourselves in financial hardship until this season. Ian’s departure from the club was planned for some time and we can’t thank him enough for his great service. Having only one turbulent time, as we have just suffered, in 17 years can be rare in professional sport now but we’ve had our tough time and now it’s to re-focus and develop Sheffield Eagles.”

“Whilst we would like our long-term future to be resolved sooner rather than later, we understand that it takes time. In the meantime, we have taken measures to ensure that we are on a stable footing, whilst the council and the sponsor continue discussions.

“The council have recently informed us that the sponsor’s planned green energy business will be classed as an ‘inward investment’, that means that if the land-sourced doesn’t work out for any reason, they will help support somewhere else for him. Once that is finalised, the sponsor will then push forward plans for the new stadium and investing in the club.”

The Eagles’ prospective sponsor, who has remained unnamed added: “We are committed to building a home for Sheffield Eagles and developing at Centre of Excellence for both codes of Rugby.

“We want to see a coordinated strategy for developing rugby in the Sheffield region and having the highest level of rugby in the City at the new Stadium in 2018.

“We believe working with Sheffield City Council, and the renewable energy projects, we have we can have sustainable investment into both codes of rugby from three-year-olds up to professional rugby, which the Sheffield region has been wanting for many years.”