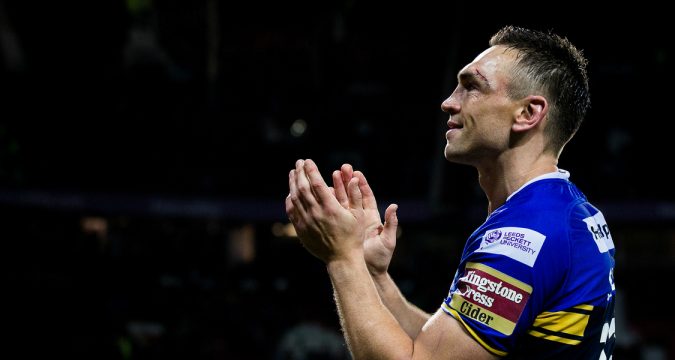 Kevin Sinfield, one of the most iconic players in Leeds Rhinos’ history, has re-joined the club as their director of rugby.

In a significant structural change at the top of the club, James Lowes has been appointed as the club’s new first-team coach while Sinfield will oversee a number of roles previously performed by chief executive Gary Hetherington.

Sinfield will spearhead the Rhinos’ coaching team, with the 37-year-old responsible for results and recruitment and other aspects of the club.

Sinfield enjoyed an unrivalled domestic career. As Leeds captain, Sinfield guided the club to seven Grand Final triumphs three World Club Challenges and two Challenge Cups. He is the only player to have won the Lance Todd Trophy, the Harry Sunderland Trophy and the Golden Boot. He remains both Leeds’ and Super League’s leading points scorer. Internationally, he made 26 appearances for England and played 14 times for Great Britain.

Sinfield took on a role at the RFL following his playing career, working as part of England’s Performance Unit, but was out of contract at the end of the year.

“I am delighted and honoured to be offered the chance to return to my club,” he said.

“To follow on from Brian McDermott is a huge challenge but one I am excited about. Brian will be remembered as the most successful coach the club has ever had and his record speaks for itself. I enjoyed playing under him and our task now, as a club, is to take the legacy he has helped to nurture and move it forward with a new generation of players.

“I have enjoyed my time at the Rugby Football League and I would like to thank Brian Barwick and Ralph Rimmer for supporting my vision for the international team. I believe the national side are in a position to fulfil their potential under Wayne Bennett and I am happy to continue my work leading into the Autumn series against New Zealand to make sure there is a smooth transition to build on the successful work we have done over the last two years. The chance to re-join Leeds Rhinos was too good an opportunity to miss however in my new position I will continue to support the international game, as Leeds Rhinos have always done.

“We have a group of extremely talented players here at the Rhinos but we find ourselves in a hard position at present. However, I know there is a mental toughness within this group to show what they can do. We have four games remaining in the regular season and all the coaching staff will be doing everything possible to make sure we finish the season in the best possible fashion.”

Hetherington added: “Our challenge at the start of the week was to address the short-term problem for the rest of the season and also ideally strengthen our structure for the future. There were three key areas that were under scrutiny: our senior management structure with myself as Chief Executive for the past 22 years working alongside the head coach on player retention and recruitment, our coaching team with regards our performances, and our players. The appointments today reflect change in two of those three areas.

“He will have responsibility for all rugby matters including team selection, preparation, performance and results of the first team. He will handle all first-team player promotion, retention and recruitment moving forward and oversee our coaching staff management and appraisal. Kevin will also have control of the vital link between our academy and the first team working with Head of Academy Coaching Rob Burrow.

“Some of my duties have been transferred to Kevin and with the departure of Brian McDermott we have a new look first-team coaching set up until the end of the season.”