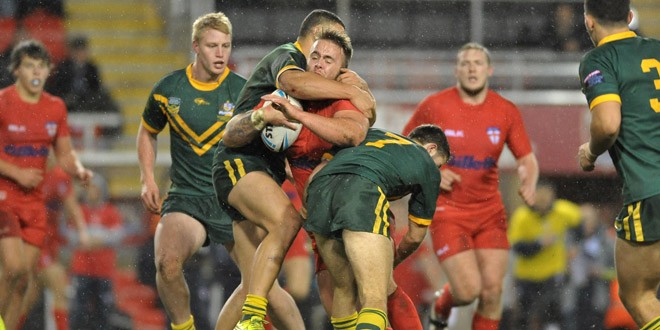 At this time of year, it’s difficult to find too many stories to get genuinely excited about in the world of Rugby League.

The long winter nights are traditionally partnered with a lack of feelgood news about our game. But anyone who was at Leigh Sports Village on Friday night will have seen a fantastic performance that would have firmly warmed up any English Rugby League fan.

After a disappointing defeat the week before, Richard Marshall’s England Academy side deserve huge credit for bouncing back to beat an impressive Australian Schoolboys side.

The weather may have been freezing in Leigh, but the performance from our boys was anything but, as you will find out if you read the report from the game on page 13 of this week’s League Express.

A 28-14 win against a side packed with talent already signed on at NRL clubs is not to be sniffed at, and it perfectly emphasises that there is plenty of talent in our own competitions, as well as in Australia.

Chief among those has to be Leeds Rhinos youngster Ash Golding, who was sensational for the Academy on Friday night. In fact, his performance was so good it left Schoolboys coach Brian Batesse declaring Golding the player of the series, and labelling him as one to watch for the future.

There are others, too. Hull FC’s Jansin Turgut captained the side superbly, and he could well be set for a breakthrough year with the Black and Whites. There was even representation from outside the traditional ‘heartlands’, as London’s Joe Keyes played scrum-half in both games during the series. After a strong end to the season with the Broncos, all eyes will be on the youngster to see if he can help fire London back into Super League at the first attempt.

So why get so excited about one victory? Well, it’s England Academy’s first against the ‘old enemy’ for several years, and firmly hammers the message home that there is plenty of potential in our young ranks of players.

With a new league restructure fast approaching, it’s now important the positive strides made by Richard Marshall – and all involved with the England Academy – are not lost over the next few years.

Stars such as Ash Golding are proof that there is plenty of talent at Super League clubs, and, with the right nurturing and care, they could soon be helping England’s senior side to victory against Australia, something that is far overdue in terms of our senior international side.