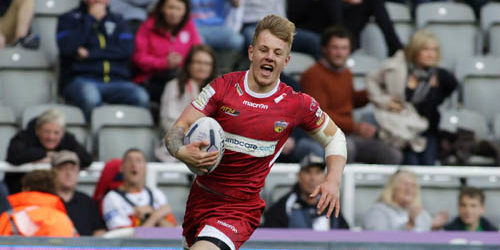 Wakefield Chairman Michael Carter has issued a hands-off warning to other clubs for winger Tom Johnstone.

The 20-year-old has set Super League alight with some dazzling displays this season, scoring his first Super League hat-trick in a victory over Salford at the start of the month.

His impressive displays have seen him linked with a move away from the Wildcats, with Wigan Warriors one club thought to be interested ahead of Josh Charnley’s departure at the end of the season.

Historically, Wakefield have been forced to part ways with their biggest stars due to their inability to compete financially, with players such as Danny Brough, Brett Ferres and Gareth Ellis all leaving over the years.

But with Johnstone under contract at Wakefield until the end of 2019, Carter insists he will not cash in on his prize asset, and revealed he has already turned down bids from other clubs.

“I turned an offer down for Tom at the back end of last season,” said Carter.

“Whether there will be an offer going forward will be pure speculation, but the answer will be the same and that is that he is not for sale. Tom’s under contract, he’s happy here and we want him here.

“It’s pretty much a waste of time to be honest. I foresee him being here the next three or four years.

“We sat down with Tom and his agent early on in the season, and at that point there’d been some questions asked of Tom. But we see some real potential in him and we think he can be a whole lot better than he is now.

“He’s only a young kid and been playing the sport for six years. There’s still a lot more improvement in Tom and he’ll agree with that. It was pleasing that he wanted to pledge his future to Wakefield.”

Johnstone is one of the numerous home-grown stars currently flourishing at Wakefield, with several youngsters beginning to emerge in Chris Chester’s resurgent side, which beat Wigan 62-0 on Sunday. Carter insists he is keen to shape the club around them, but he can only do so on one condition.

“Kids like Tom, Max Jowitt Jordan, Crowther and James Batchelor, who has just signed a four-year deal, these are the kids I want to build the club around. The more Wakefield people I can get in this club the better and that’s both on and off the field. I will do my utmost to keep these kids here at Wakefield Trinity. We want them playing for Wakefield, not going off to Leeds, Wigan or wherever.

“There’s one caveat to it all. If we can get an average crowd of 6,000 here and get the local businesses on board as well, then there is no reason why the Tom Johnstones of this world need to go elsewhere, and we can shape our squad and pay them accordingly too. I’m not looking at keeping them here on the cheap, but to do that we need to be averaging 6,000. I will do everything to keep them here, but I need help.”