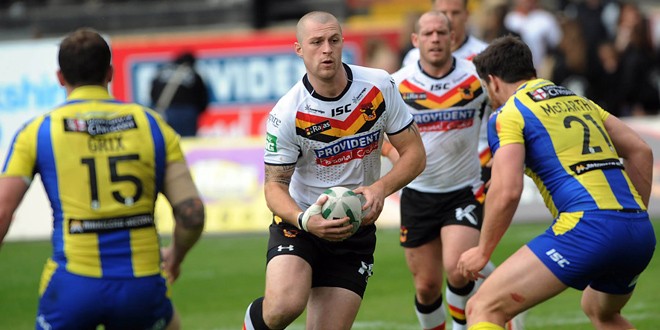 What to look out for
0’ – The home side try out a new idea, with stand-off Lee Gaskell and full-back Brett Kearney swapping positions. Luke George pulls out of the match day 17 at the last minute and is replaced by dropped Jamie Foster.

7’ – Warrington draw first blood through Anthony England, who powers his way over the line after preventing an interception. Former Bulls star Chris Bridge adds the conversion: 0-6

11’ – Lee Gaskell fires a cut-out pass and finds Jamie Foster powering down the left wing and crossing in the corner. Foster fails to convert his score: 4-6

14’ – The Bulls deny Chris Bridge thanks to good scrambling defence.

16’ – After the referee calls advantage and gives the Bulls a free play, loan signing Antonio Kaufusi finds Brett Kearney, who races 60 metres – outpacing Matty Russell in the process – to score. Foster slots the kick from out wide: 10-6

18’ – Less than two minutes later, Chris Bridge hits straight back for the Wolves, galloping over the line to level the scores. Bridge converts his own try: 10-12

29’ – The Bulls have four successive sets after a penalty and two drop-outs and the pressure pays off, with Luke Gale’s flat pass putting in Tom Olbison. Foster lands the goal: 16-18

43’ – Micky Higham has a try ruled out for double movement.

48’ – The home side score with their first real attack of the second half – Adrian Purtell pouncing onto a Lee Gaskell kick. Foster adds the extras and levels the scores: 22-22

59’ – Matty Russell nudges the Wolves clear thanks to a fine solo effort from a Micky Higham pass. Bridge adds the extras: 22-28

72’ – The crowd goes wild as Danny Addy sends in Adrian Purtell under the posts. Foster lands the extras to put Bradford in the lead: 32-28

78′ – Bradford force a drop-out. Warrington go for the short kick but it doesn’t go 10 metres. The Bulls kick at goal and Foster is successful: 34-28