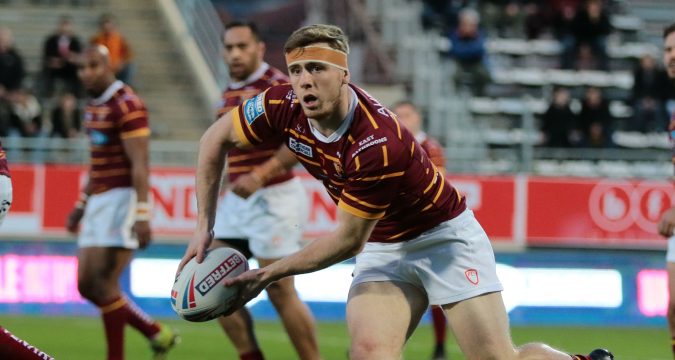 The hooker is back at home and recovering after spending a weekend in hospital following a scary neck injury in Huddersfield’s recent defeat to Leeds.

Like many injuries, it was innocuous as he took the ball forward into a posse of defenders.

“I saw a little opportunity and took a gamble, like I do,” O’Brien said when recalling the incident.

But on this occasion, something went wrong.

“I just remember hitting something hard, falling to my knees and elbow and felt another pain.

“I said ‘argh’, then Cuthbo (Adam Cuthbertson) and Kruise got off me and I stayed there. To be honest, I thought I’d just jarred my neck and it was nothing major.”

That, however, proved not to be the case.

O’Brien had, in fact, suffered a small fracture to his C4 vertebrae in his neck, an injury that could have proven extremely serious.

“It was just a normal rugby thing, there was nothing to it. I guess I just caught my head in the wrong place. When they said they were putting me on the stretcher I thought it was just a bad jar and I’d be having a week off.”

Thankfully, O’Brien doesn’t require neck surgery, a procedure that, at any point in life, would be a scary prospect.

That said, the 27-year-old must remain in a neck brace for another five weeks to ensure he fully recovers, and that includes when he tries to sleep.

“There’s no driving or playing with my young boy,” he said.

“Just even having a drink, I had some medication for the pain, I put some tablets in my mouth but I couldn’t tip the cup up! So I’m drinking through straws, eating with a plate under my chin and feeding myself that way, and not turning my neck when someone is talking to me too. I’m getting used to it.

Despite the injury and the inconveniences, O’Brien remains in good spirits.

“It could have been a lot worse and done a lot more damage.

“I’m positive about it, it’s just the sort of person I am. I’ll just get on with it; it’s probably my way of dealing with it. It is a serious injury but it’s not as bad as it could have been.

“A massive thank you to our welfare officer Steve Hardisty. He sat in the physio room and messaged my wife saying what had happened and talked through the situation. Steve followed the ambulance to the hospital. Because of the Covid laws he sat in the car park for three hours as he couldn’t come into the hospital. He was messaging my wife Lauren and did an outstanding job.”

Already, O’Brien has his sights on a return to the pitch.

“You’ve always got to look positive,” he said.

“I’m not setting a time frame; all I’m hoping is in four weeks the specialist says you can slowly get back into it. They might say they want me in the brace for another couple of weeks. I’ll just listen to what they say and do it. When it’s a hammy or an ankle you can chance it, but this is a bigger picture.”

With O’Brien’s season appearing to be over, the Giants moved for Halifax hooker Brandon Moore last week in a deal that will see him play out the remainder of the 2021 season.