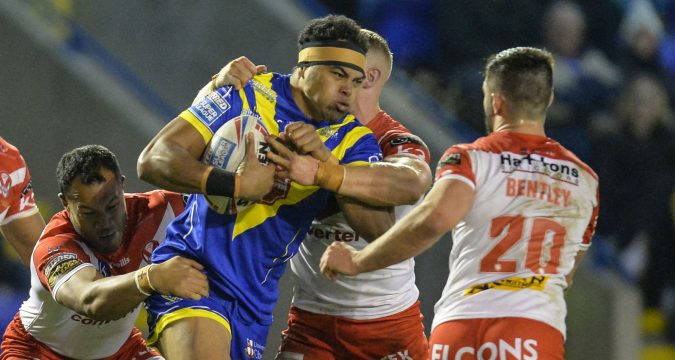 Powerhouse prop Sitaleki Akauola has a double firmly in his sights – success with Warrington followed by a first World Cup.

Now he’s being tipped by make the squad selected by Kristian Woolf, whose St Helens side were recently beaten 6-2 by the Wolves, with Akauola impressing.

“Perhaps I didn’t do myself any favours with Kristian that night,” smiled the former Wests Tigers and Penrith Panthers man.

“But I’ve definitely got hope for making the squad, although it’s a long season and a lot can happen before the end of the year.”

One thing Warrington are desperate to make happen is a first title success since 1955, when Oldham were beaten in the play-off final.

They have been to four Super League Grand Finals since 2012, but lost to Leeds and three times to Wigan.

After Leigh were seen off 44-18 to make it five Super League wins in succession, Wigan are next in line for Steve Price’s side at the DW Stadium on Wednesday, and Akauola is up for the challenge, but warns it will be tough.

“We can take a lot of confidence from beating a team like St Helens but it’s really important that we don’t get ahead of ourselves,” he said.

Born in Auckland, Akauola was in the New Zealand Warriors junior set-up before joining Wests, for whom he made the first of eleven NRL appearances in 2013.

He played 21 times in a two-season stint at Penrith before joining the Wolves ahead of the 2018 campaign.

He has topped 60 appearances, having also had a loan stint at Rochdale in 2019, and added: “I’ve been working hard with Pricey, Ade Gardener and the rest of the coaching staff.

“I want to best utilise my energy on the field so I’m happy just being able to do my job for the boys.”

Akauola is out of contract at the end of this season, and it’s yet to be confirmed whether he will stay on under Price’s successor Daryl Powell next year.