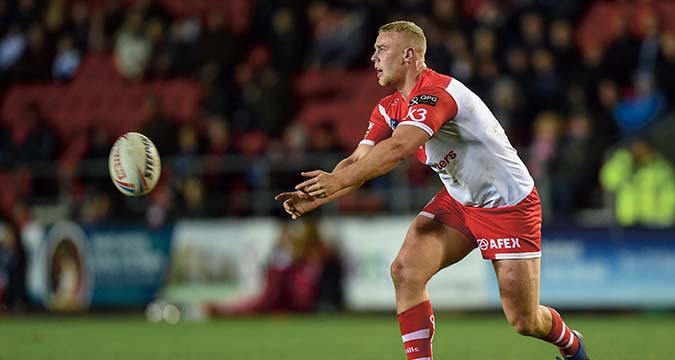 Now the forward, who figured in the 2019 Grand Final win over Salford, is looking forward to getting stuck into a scrap at the opposite end of the table.

Forced to be patient after the postponement of the July 11 game at Hull because of Covid issues at the Black and Whites, the 26-year-old, who has been loaned to the Centurions from Huddersfield is set to make the first appearance of his second spell at the club in Thursday’s tough home clash with Warrington.

Ashworth played four times for Leigh on dual-registration early in 2019 before returning to Saints and playing in the Challenge Cup final defeat by Warrington at Wembley, as well as the Grand Final at Old Trafford (he also played for England Knights that year).

Two years ago, Leigh were on course for a fourth-placed finish in the Championship.

Now acting coach Kurt Haggerty is leading the bid for against-the-odds Super League survival by the basement club, who have been beaten in all 13 of their league games this year.

As well as Warrington prop Rob Butler, he recruited Ashworth, who joined Huddersfield on a two-year deal ahead of this season but has found his opportunities limited, as part of a reshuffle designed to refresh his injury-hit squad.

While Australian pair, hooker Nathan Peats and prop Nathaniel Peteru, headed to Huddersfield on loan to free up quota space for potential signings from Down Under, halfback or hooker James Cunningham was set to join Ashworth in coming the other way.

However, the move for the former Hull, London Broncos and Toronto player failed to materialise.

Haggerty is pleased to have Rochdale-born Ashworth on board, and said: “Jack is a big, aggressive middle, who is also good defensively.

“He’s coming here to get game time and as long as he rips in, he should be in our 17 each week.

“He created a good impression the last time he was at Leigh and Derek (Beaumont, the club owner) speaks highly of him.

“Jack has maybe not got the game time he was looking for at Huddersfield so far, but he’s a Super League professional and he will soon fit in here and will adapt really quickly.”