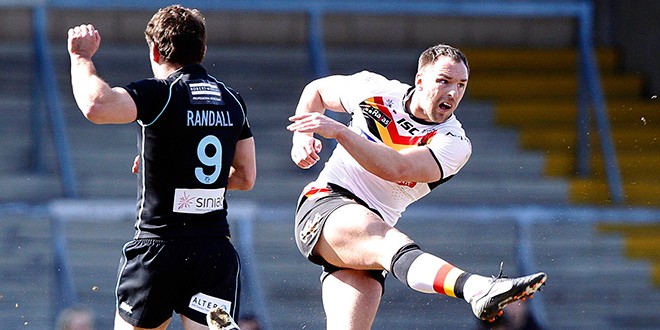 Bradford Bulls players have been told they will have to take a 10 per cent pay cut to help get the club through financial difficulties.

And the club is claiming it will be forced to sell two players in a bid to show the RFL they are cutting costs immediately and are doing all they can to avoid administration.

Halfback Luke Gale is likely to be the first out of the door, with discussions having opened about a potential move to Hull FC, while Jarrod Sammut could also be on his way out.
This revelation comes after the Bulls held a fans forum at the Provident Stadium and explained their current situation.

They claimed that the budgets declared to the RFL by the former Bulls board bore little resemblance to the ones actually given to their managers. Now, the directors claim that the club must make £400,000 of savings in the next twelve months.

Chief executive Robbie Hunter-Paul said that survival is the number one objective and that players were told they could leave but would be replaced. He also suggested that the sale of star player John Bateman to Wigan had been authorised by former chairman Ryan Whitcut without the knowledge of the coach Francis Cummins.

Player agent Craig Harrison said: “I have the utmost respect for Francis Cummins who has been put in a shocking position.

“He’s spent four or five months putting a team together, only to be told he has to disband it, and that’s after losing Elliott Whitehead and John Bateman.

“He’s a young coach wanting to make his name in the game who lost his two best talents to keep the club going and has now been asked to lose another two.”

Head coach Cummins told League Express: “The frustration is that we’re building here and it’s obviously disappointing to now find out where the club is really at.”