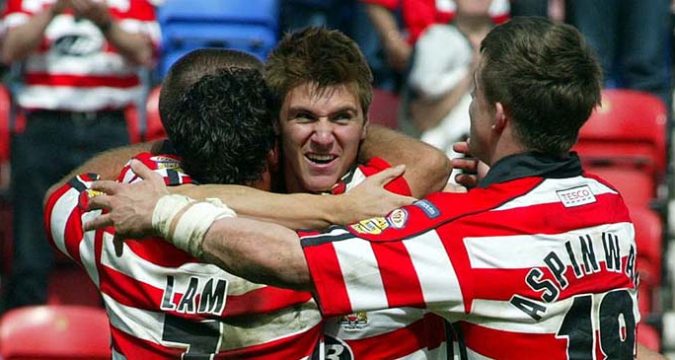 Good Friday games are somewhat of a traditional fixture in Rugby League circles. And we are sure that, like us, the fact that we can’t go out and watch our team in action today is as tough as anything we have had to face during the current coronavirus lockdown.

So here at Totalrl.com we have picked out five memorable Good Friday games from the last 20 years for you to reminisce over.

Wigan and St Helens have played out numerous enthralling Good Friday games, but not many will be as memorable as this one, when a vastly understrength Warriors side recorded a famous victory over their bitterest of rivals

Deprived of nine first-team players through injury and fielding four debutants, including an 18-year-old Kevin Brown, the Warriors battled back from a 22-12 half-time deficit and then holding on in the desperate, gripping late stages.

Those youngsters were led around the field by those senior players not struck down by the injury jinx and no one was more impressive than the late Terry Newton, who grabbed two vital tries and kept the Warriors pack rolling forward through a compelling contest.
St Helens had opened the scoring with a Paul Sculthorpe, before a smartly-worked move directly from a scrum gave Darren Albert a one-on-one opportunity against Wigan debutant Jon Whittle. The Aussie winger skipped around his man to score.

Wigan were soon level after hooker Newton scooped the ball up from dummy-half and burrowed his way over from close range, but it didn’t last long as his opposite number Micky Higham evaded three Wigan defenders on a scurrying run to the line, Sculthorpe adding the simple extras for 12-6.

Saints lead was increased when Aussie Jason Hooper beat Shaun Briscoe in a thrilling race to the line.

Despite Danny Tickle striding over for Wigan, it looked like Saints had got the crucial try on the stroke of half-time when Albert pounced for his second. Sculthorpe narrowly missed the touchline conversion, but an interval score of 22-12 had Saints in command.

If Wigan stood any chance of getting back into the game they needed to score first in the second half, and they did just that with current coach Adrian Lam the architect. The diminutive scrum-half dummied through a gap on halfway and it led to Briscoe racing over. Tickle’s extras closed the gap to four.

A Tickle penalty for offside brought Wigan closer still, and from then on they continued to pour forward, before Saints eventually cracked. Another punishing dummy-half run from Newton saw the hooker stretch over, and although Tickle couldn’t convert from out wide, Wigan now held the lead for the first time in proceedings.

It took some mercurial defensive work from Wigan, but they managed to hold on to claim a win in the most unlikely of circumstances. 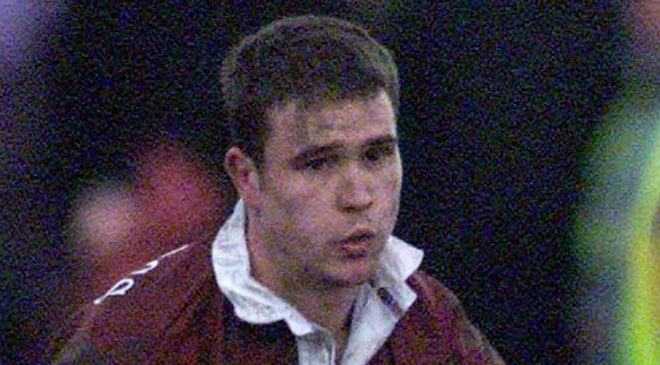 Current Batley coach Craig Lingard claimed a second half hat-trick to give the Bulldogs a narrow victory over the Heavy Woollen rivals back in 2001.

It was Batley’s first victory over Dewsbury in four years and as the home supporters went home happy, Bulldogs chairman Kevin Nicholas declaring it the best day in the reign of the present board if only for the fact that, for the first time, the Bulldogs had wrested the Roy Powell Memorial Trophy from Dewsbury’s grasp.

Rams winger Adrian Flynn and forward Andy Fisher both crossed out-wide in the opening quarter, leaving scrum half Barry Eaton, whose kicking game had so far prevented Batley from getting into the match, with two tricky conversions from either touchline. He was successful on both occasions.

Towards the end of the first half Batley started making progress, but it wasn’t until the second half that they really took control. Within nine minutes of the re-start there was just two points in it after a quick-fire double from Lingard.

Substitute prop Craig Richards set up the first after a drive from deep before the ball was spun across the line, with Ryan Horsley sending a long, bullet-like pass which Lingard took on the burst. He bounced off two defenders before racing to the line for a touchdown.

Four minutes later he was again in support to take a sleight of hand pass out of the tackle by busy hooker Andy Heptinstall, and high step it over ten metres for a touchdown to which Jeremy Dyson added a conversion to make the score 10-12.

Lingard got his third 12 minutes later when a side-shuffle from Glen Tomlinson unhinged the Rams defence sufficiently for his inside pass to send Lingard scorching through. Dyson was unable to convert but the game was now Batley’s to lose.

The Rams threw everything at them and Kevin Crouthers, Damien Ball and Eaton all went close, but the Bulldogs held out and were the ones celebrating when the final hooter sounded. 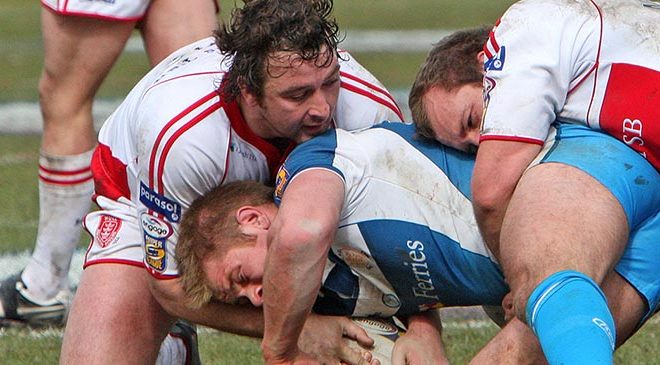 James Webster was the hero of the day when he beat the typical East Hull wind to give the Rovers a memorable Good Friday victory over the West Hull Neighbours.

In a low scoring affair, the hosts were 10-0 up on the hour mark after a Jake Webster try in the opening five minutes of the first half, converted by Paul Cooke, before Daniel Fitzhenry added to the lead on 58 minutes.

Hull FC had had their opportunities to get back into the game, but the video referee ruled out a Motu Tony try claim before the break and Danny Tickle missed an attempted penalty just minutes before Fitzhenry’s touch down.

The Rovers forwards had the edge given that Hull FC were suffering an injury list that already saw them playing without first choice props Garreth Carvell and Ewan Dowes, but Hull soon started to take advantage of playing the wind at their backs.

Tickle made up for his earlier miss by crossing for a try himself and adding the extras to Kirk Yeaman’s effort to tie up the scores with just nine minutes remaining.

That’s how it seemed likely to stay until James Webster snatched the two points for Rovers with his field goal. Hull had kicked deep after only the fourth tackle near their own line and fullback Shaun Briscoe carried the ball back with a surging run that put Rovers on the attack again. Four more drives and they gained the position for Webster to slot over the match-winner.

There have been more spectacular goals, but none scored under such pressure and against the wild forces of nature. It was from only 15 metres out, just to the left of the posts and barely scraped over the bar. But it was against a raging gale that had blown an earlier attempt by Paul Cooke way off course. 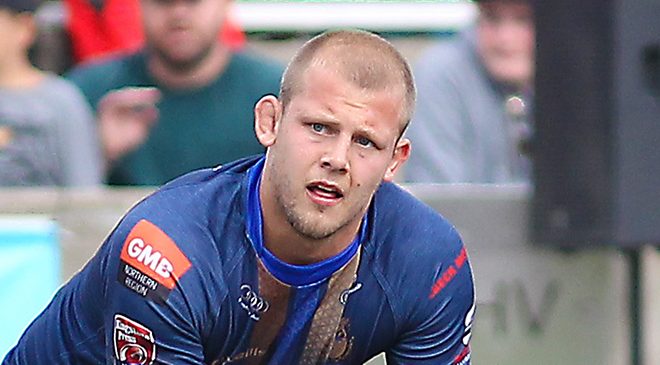 Cumbrian derbies are never short of passion and talking points and the Easter encounter between Whitehaven and Working three years ago was no exception.

It says something about what is at stake in the game when the first real talking point is when the visitors’ player-coach gets sin-binned for a late hit – in this case, that was Carl Forster on Carl Forber.

But despite being a man down, it was Whitehaven who opened the scoring when Scott McAvoy bundled his way overtaking three defenders with him. Fresh out of the sin bin Forster crossed next followed by Jessie Joe Parker, to give Whitehaven a 16-0 half-time lead.

It was a different story after the break though, with Whitehaven, who had played so well in the opening 40, starting poorly. The hosts took full advantage of that and within 11 minutes of the restart they had scored two tries and we well and truly back in the game.

First Sam Dowsett kicked through and winger Scott Rooke pounced, before Parker shot out of the Haven line, missed his man and Joe Hambley was in for the first of his two tries.

Paul Crook put Haven back to more than a score in front with a penalty goal, but when testimonial man Jason Mossop scored a fine try wide on the left and Hambley then went in for his second, Workington found themselves with less than 10 minutes remaining.

As Forber waited to take the conversion for that second try, things took an unusual turn as the match commissioner was seen talking to the referee on the touchline. The commissioner then went onto the pitch and talked to the Whitehaven players for several minutes. After the delay, Forber missed the goal, and it wasn’t the last thing that went wrong for them in the final moments.

With just five minutes to go and on the last tackle, Whitehaven’s Steve Roper kicked downfield. It looked innocuous but proved decisive. Town’s Jamie Doran bent to pick it up in the dead ball area and it rolled gently between his legs. James Tilley pounced on it and Crook converted.

Trying to regain the lead Workington went down their right and kicked ahead but the ever-reliable Craig Calvert dropped on the ball with only seconds to go and Whitehaven took the points, and more importantly the bragging rights after losing the last two derby games to their Cumbrian rivals. 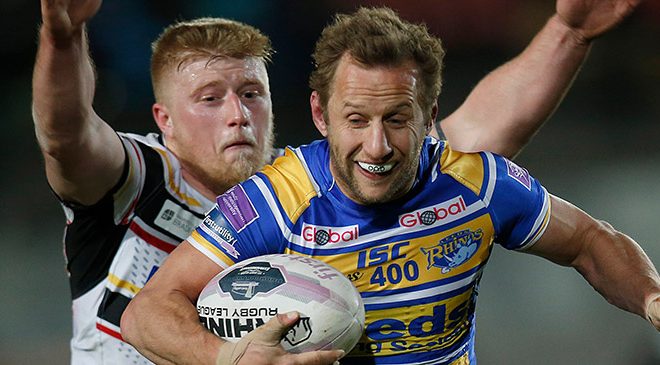 Okay, we know this technically wasn’t a Good Friday game, but no Easter round would be complete without the Bradford and Leeds clash that became a Maundy Thursday tradition in Super League.

You might be looking at the scoreline and wondering why this has been selected as a memorable game, but it was memorable more for what the game signified rather than the rugby on show.

With the Bulls rooted to the bottom of Super League after a six-point deduction for entering administration there was a very real awareness that this was going to be the final Easter meeting between the sides for some time – and as the season progressed that proved to be the case.

But on a happier front, the game also marked 400 club appearances for Leeds legend Rob Burrow – and he celebrated that landmark with the Rhinos’ ninth and final try in a landslide victory that was in stark contrast to so many other past matches between these sides.

First-half tries from Kevin Sinfield, Joel Moon, Danny McGuire and Ryan Hall, plus two Sinfield goals sent Leeds into a 20-0 within the opening quarter of an hour, before a Lee Gaskill try and Luke Gale goal gave the quiet Bulls fans their only reason to cheer on the night.

Hall crossed twice more after the break, with further Rhinos tries coming from Liam Sutcliffe, Kallum Watkins and Burrow as the gulf between the two sides was clearly evident.

Odsal would usually be packed out for these games, but the fact that only 10,000 people turned up gave the impression that many Bulls fans knew what was expected nd didn’t want their previous memories of these classic fixtures tarnished.