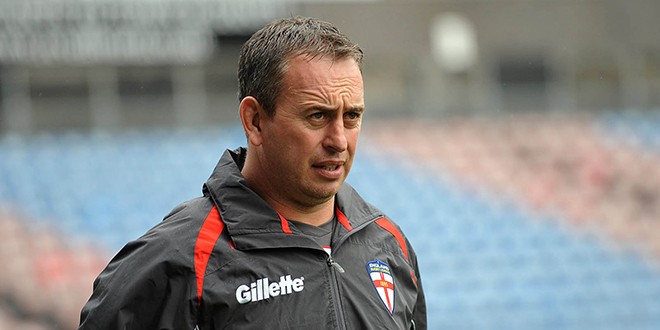 England coach Steve McNamara has told the players who played in Rugby League World Cup 2013 that they have the ability to determine whether they will be involved in this year’s Four Nations tournament.

McNamara has also thrown down the gauntlet to every English player in the First Utility Super League to play their way into his plans for the tournament in Australia and New Zealand this autumn, details of which were announced today (Thursday).

The 2014 Four Nations kicks off with England facing Samoa or Fiji in Brisbane on Saturday October 25 in their first match since the heart-breaking World Cup semi-final defeat by New Zealand at Wembley Stadium last November.

The pain of that 20-18 reverse was felt by the whole nation, not least the England squad, and McNamara has challenged those players to prove they deserve another shot at the world’s best this autumn.

“The World Cup squad was a group of players who were young enough and talented enough to all be considered for selection for the Four Nations,” said McNamara.

“I know the qualities they have, both as players and people, but that doesn’t mean any of them are guaranteed to make the squad, because they also need to have form.

“The start of Super League has thrown up a few surprises with some clubs pushing hard for honours and some individuals in outstanding form. If they keep playing like they have been, it’s going to be impossible to ignore them.

“Clearly the backbone of the Four Nations squad will come from the World Cup but there are plenty of exciting opportunities for players who have been in form in Super League.”

McNamara now works in Australia as assistant coach of Sydney Roosters and is keeping up-to-date with the events in Super League as well as maintaining close contact with the England players in the NRL.

He will return to the UK in June for a three-day training camp with the Elite Training Squad that will be the last opportunity for the England players to get together before they fly out to Australia in early October.

The identity of England’s opening opponents will be determined on May 3 when Fiji and Samoa, the best performing Pacific nations from RLWC2013, meet in a qualifier in Penrith. England’s first game forms part of a double header at Suncorp Stadium with Australia facing New Zealand in a repeat of the World Cup final.

England then head for Melbourne to play Australia on Sunday November 2 before flying across the Tasman Sea to take on New Zealand in Dunedin.

The Four Nations concludes with the final at Westpac Stadium, Wellington, on Saturday November 15.

Whilst many people will inevitably dwell on the events at Wembley Stadium last year, McNamara insists England’s preparations and approach will not be shaped by thoughts of revenge or redemption.

“We spoke as a squad immediately after the semi-final about the disappointment we felt at missing out on the chance to have a crack at Australia in the final; we have spoken about it since then and for us it’s all in the past now,” he said.

“Rather than dwell on what we didn’t achieve, we want to put ourselves in the best position to do well in the Four Nations.
“I’m genuinely excited by what the tournament holds: they are going to be three very tough games and the schedule features a number of challenges for us but I have no doubts that come the Four Nations we will be as well prepared as we can be.”

The 2014 Four Nations schedule in full is as follows: