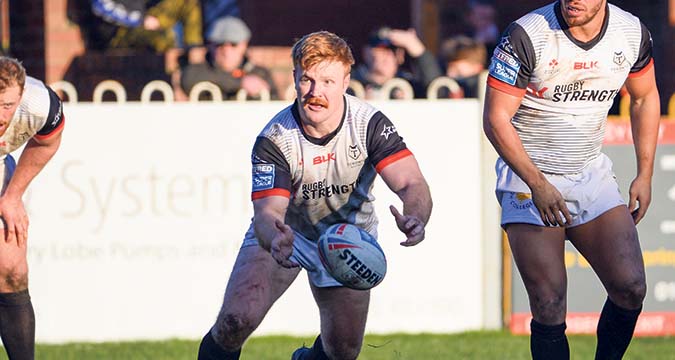 As revealed by League Express, the pivot has put pen to paper on a two-year contract with the club and has already started training with the Giants ahead of the 2021 campaign.

Once regarded as one of the Championship’s elite players, he was selected for the England Knights training squad while with London Broncos as the only Championship representative in the England setup.

Promotion to Super League soon followed and he was a regular in Danny Ward’s side that was narrowly relegated.

He subsequently joined Toronto but had agreed to join the Giants before the Wolfpack’s demise.

“When they first expressed an interest it felt nice,” Cunningham said.

“Especially after being treated so badly. It’s a good club and I’m really happy, but I also kind of feel bad that I’ve got a new team when a lot of my team-mates haven’t. I’ve felt guilty that I’m sorted and the rest are in limbo.

“I’ve been down a couple of weeks and the facilities are second to none. They have really good staff who want to help the players progress. We’ve got a really good squad with exciting youngsters. By keeping hold of them we can start pushing for the play-offs. I just want to get in there and play behind some of the big lads.”

The 26-year-old hasn’t played since undergoing a serious hamstring operation, but he is readying himself to rediscover his running game with the Giants, while running in tandem with the club’s other hooker Adam O’Brien.

“I’ve picked up a few injuries now as I’m not as young. But as I’ve got older I’ve reined back the explosive side and weighed up my options more, but I’d like to pick back up that side to my game.

“That will come with just a string of games. First of all I need to be selected.”

The club’s managing director, Richard Thewlis, added: “It feels appropriate now to get this news out formally after a degree of speculation for quite some time.

“James agreed to join the club some time back, having obtained permission to do so from the Wolfpack, but we’d agreed to keep the matter confidential for a couple of reasons. “Firstly to assist the Wolfpack in finding new owners as a perceived exit of players would have been poor publicity and made a difficult process in attracting new owners even more so. And secondly, because James is owed considerable monies by the club, which he had hoped would have been honoured by any new owner.

“That is not going to be the case if the LiVolsi-led bid goes forward with its ownership proposal and therefore James will have to either hope for a new owner of the Wolfpack other than the one we heard from last week or pursue the previous owner for monies, which was the route Mr LiVolsi said the players and staff who would not be at the club next year would have to take.”