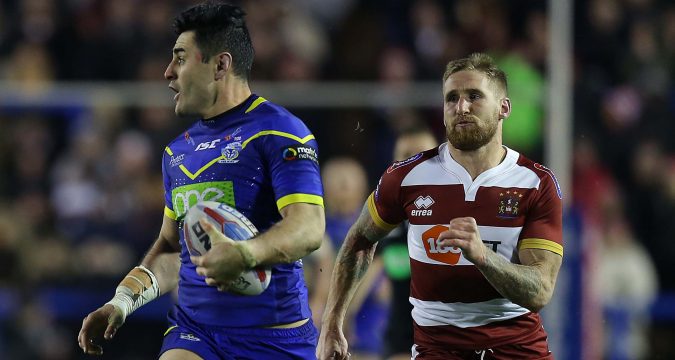 Both of these players have shown immense form in 2018. While Ratchford has won the Albert Goldthorpe Medal for the first time this year, Tomkins has perhaps produced his best form since returning to Wigan from the NRL. He will surely be a big miss for the Warriors in 2019. With nerves high in the Grand Final, a fullback’s temperament under the high ball will be tested to the max. Both these players contributed hugely in their team’s semi-finals: Ratchford provided a brilliant pass for Lineham’s match-winning try while Tomkins’ lightning pace helped him notch against Castleford Tigers. Whoever keeps their nerve the best will play a huge part in their team’s success.

These two edges played key roles in sending their teams to the Grand Final. Tom Lineham, ably assisted by Bryson Goodwin, Bodene Thompson and Kevin Brown, scored the two tries that made the difference for Warrington against St Helens. While Castleford constantly attacked Wigan’s right edge through their dominant left side but were turned away each time by Wigan led by the impressive John Bateman.

Wigan will make it incredibly tough to create an overlap with their well-executed sliding defence but special plays from players like Ratchford opened up Warrington’s previous opponents. These Grand Finals tend to be won on defence and Wigan’s resolve will be severely tested by Warrington’s in-form left edge.

On the other side of the field, these two players will surely come up against each other at some point. Murdoch-Masila has tended to come off the bench recently into the right side second row which will be up against George Williams who defends on the left. Warrington’s game plan will probably contain plans for Murdoch-Masila to generate quick play off the back of Williams’ tackles. If BMM gets a one-on-one with him near Wigan’s tryline, there will only be one winner. Joe Greenwood will be working overtime to make sure Williams has some protection.

Meanwhile, George Williams caused Castleford plenty of problems with his immense speed and trickery. And with BMM, a big body defending on the edge, Williams will be looking to isolate BMM’s lack of pace.

These two props will come against each other on multiple occasions. Whoever is able to dominate through the middle will go a long way to winning the game. Ben Flower will want a better showing than in 2014 while Chris Hill is still yet to win a Grand Final with Warrington after three previous defeats.

The motivation is high for both, both are high quality forwards and the leaders of their starting pack. Both sets of forwards will start the game all guns blazing and will be eager to dominate early carries to get the mental and physical edge over their opponents. This battle will be fascinating to watch.