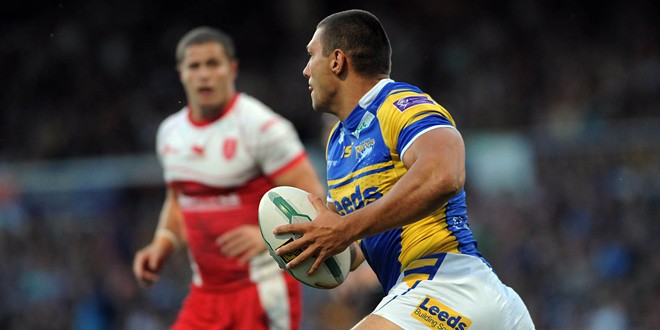 Leeds and England winger Ryan Hall admits he didn’t give much consideration to any interest from elsewhere before re-signing for the Rhinos on a five-year contract, rejecting offers from the NRL and rugby union in the process.

“I still had three years left on my previous contract so no one was expecting me to leave or walk out the door, but it’s nice to be staying at Leeds,” said Hall.

“During the World Cup lads like Gareth Widdop and the Burgess brothers were talking about what it’s like in Australia. That is the lifestyle they have chosen, but it isn’t for everyone.

“I don’t begrudge anyone going Down Under. Hopefully, they will open Australian eyes to our game. It is the same with Sam Burgess moving to union. A lot of union people don’t like our game and write it off. But when you get a League player going over and creating headlines, it can help change opinions.

“It is nice to know that by giving me a long-term deal the club is putting its faith in me and sees me as part of its future success.”

This year the Rhinos will travel to Wakefield on Sunday April 6, a week after the sides meet in the corresponding league fixture, for their fourth round Challenge Cup clash. Hall is excited by the draw and his team’s prospect of a return to Wembley.

“This is six years in a row we’ve had Super League opposition in the fourth round,” said Hall.

“But in 1999 the Leeds side went through the competition playing sides like Wigan and Saints before getting to the final against London. That was a good way to win it, and if we are going to do it I’d like to go down a similar route of playing really tough games right throughout the competition.

“You can never really take much out of playing the same side in consecutive weeks. Every game is different, and when one of them is a knock-out it adds a bit of extra spice. Wakefield been playing well this season and scoring points, so it should be a good tie.”