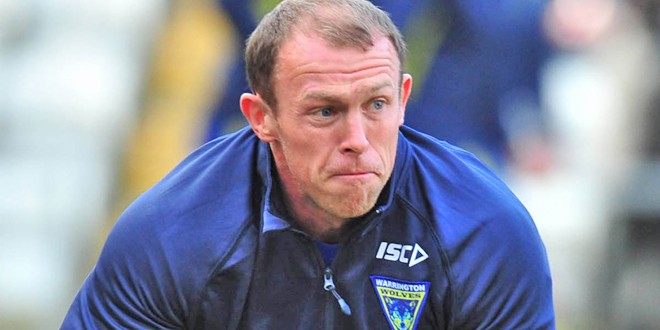 Warrington Wolves hooker Micky Higham is confident he will be ready to face Huddersfield Giants this Sunday, despite sustaining facial injuries against Wigan last Thursday.

The 33-year-old missed the final moments of the 4-12 defeat after clashing with Scott Taylor’s boot in a tackle, leaving him covered in blood from numerous wounds.

However with a long turnaround before Sunday afternoon’s game, Higham does not see his patched-up face putting a stop to him getting out on the field.

“I got patched up after the game and look a bit like Frankenstein’s younger brother at the moment,” Higham said.

“There are three or four stitches in my forehead, a couple on my nose, two on my top lip and two above my eye. I have also got a right shiner of a black eye.

“But it looks worse than it is. It’s all pretty superficial and it will heal. It’s all part and parcel of playing Rugby League.

“Fortunately we played on Thursday and then not again until Sunday, so there is plenty of time for things to heal up. I’m confident I’ll be available for selection. I’ll not be letting some scratches put me out.”

Both the Wolves and the Giants will be going into the clash on the back of under-par performances that ended in defeat. The Wolves went down 12-4 to Wigan, meaning they have only won three of their opening six matches, while Huddersfield lost 30-14 to a previously winless Catalan Dragons on Saturday.

But for Higham, many lessons have been learned from their defeat to the Warriors and he expects an improved performance from both sides to be on show at the John Smith’s Stadium.

“Defensively we played well, and keeping Wigan to just 12 points is a positive for us,” added the hooker.

“But our attack was way off. We were not posing enough questions with the ball in hand, which was disappointing.

“We come up with a game plan during the week to get us the two points, but we are not always sticking to it and players are sometimes trying to do their own thing. We’ve not quite been firing on all cylinders yet this season, but we just need to stick to what we come up with before games and we will come good.

“We’ve got over a week to put things right, and what better way to show that we have done that than another game against another top side in Huddersfield.

“Their result in France will make them more dangerous, because they will be hurting and smarting from it and will be looking to bounce back as well.

“We tend to play well against Huddersfield and there have been some pretty good clashes between us in recent years. It’ll be another tough challenge, but it should be a great game.”