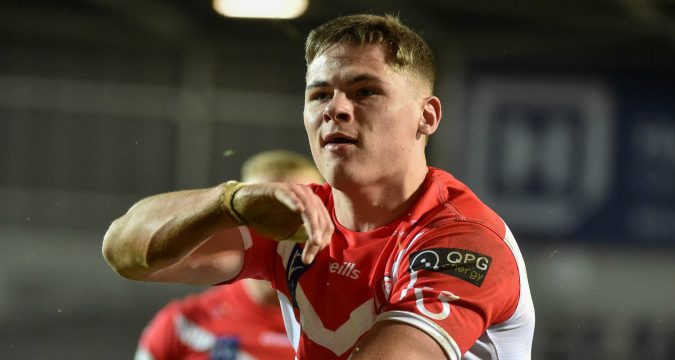 Heartbreak for Sean O’Loughlin but jubilation for James Graham and Zeb Taia as Saints and Wigan battled to their physical limits for a full eighty minutes in one of the most memorable Grand Finals in Super League history.

After 302 days and multiple season adaptations, the season finally came to an end as the competition’s two most consistent sides tore one another apart in a simply brutal Super League Grand Final.

Sam Powell and Joe Greenwood returned for Wigan in place of Ben Flower, ruled out through injury, and Harry Smith. O’Loughlin featured for his 459th, and final, Wigan appearance. George Burgess was left out of Adrian Lam’s side.

Saints had an unchanged squad. Graham, the most capped England player ever, and Taia made their final-ever professional appearances.

Super League’s first-ever behind closed doors showpiece had no fans in attendance but that didn’t matter as most tackles thunderously echoed around a near-silent KCOM Stadium. Wigan’s opening tackles were intense, hard-hitting and set the tone for an immense fixture.

On 29 minutes, Hardaker darted over the line but an outstanding cover tackle from Lachlan Coote prevented a certain opener.

The only points of the half came on the first half hooter as Coote knocked over a penalty goal for a tackle off the ball, meaning Super League had its lowest scoring first half for a Grand Final in its 23-year history.

Taia looked to receive a lucky bounce after James Roby’s grubber ricocheted and dot the ball down but this was chalked off by the video referee for offside. Willie Isa’s executed a forward pass to Joe Bullock from the play-the-ball to apply continual pressure on their line, but the Warriors held firm.

Jake Bibby captured a looping ball from Bevan French and tried to slide his way over the line but was pushed into touch by a stern Saints defence.

Finally, with 15 minutes remaining, Wigan scored the first try of the night. French received the ball from Thomas Leuluai and quickly shifted the ball to Bibby, who crashed over out wide. Zak Hardaker’s conversion bounced off the post.

Following a high tackle from Jackson Hastings on Theo Fages, Coote converted his second penalty of the night to put the scores all-even at 4-4.

Hardaker had a golden opportunity to clinch victory in the dying moments with a penalty goal, but the kick fell just short.

It’s practically impossible to translate the finish into words but I’ll give it a go. Tommy Makinson’s drop-goal attempt from 40m out hit the posts but the bounce of the ball fooled French. Jack Welsby, the youngest player on the pitch, passionately chased the bobbling ball and dotted it down to win the match for Saints in the final minute.